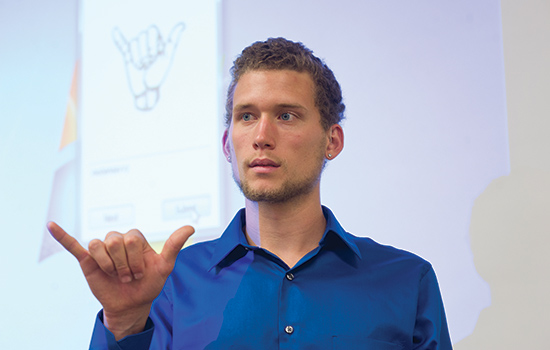 Wade Kellard, an RIT/NTID mechanical engineering technology major, demonstrates technology that converts hand shapes to text. He’s a member of MotionSavvy, a team of students who participated in the Saunders Summer Start-up Program, which provides mentoring for newly-formed businesses.

Five RIT/NTID students who hope to make it easier for deaf and hearing people to communicate have completed the Saunders Summer Start-up Program intended to help promising new businesses focus on development.

Their team, MotionSavvy, is developing applications for the Leap Motion 3-D  sensor, which was released July 22 and recognizes the slightest hand movements. MotionSavvy has developed an application that will translate a hand shape into a text letter of the alphabet.

With more work, the team plans to develop applications that will enable the device to translate sign language into words and sentences. The device could be used in retail settings or other places where brief personal interaction is needed.

“We’re trying to break communication barriers,” says Ryan Hait-Campbell. “That’s why I think it’s going to succeed, because a lot of people are behind it, and we’re all deaf.”

Hait-Campbell, a new media and design major from Seattle, Wash., grew up with painful memories of being one of a few deaf students in his large school and not being able to fully communicate with others. “I don’t want others having to experience that.”

It was more than a year ago Hait-Campbell learned about Leap Motion. He knew it could have applications converting sign language into text or speech.

In April, the team entered NTID’s The Next Big Idea competition, sponsored by ZVRS, and won third place and $2,000. They had already been accepted in the Saunders Summer Start-up Program, which gave them mentoring and $14,500 for expenses.

The team used some of their money to hire a co-op, RIT/NTID student Michelle Giterman, a finance major from Austin, Texas, and lawyers to help them patent their ideas.

MotonSavvy’s first application for Leap Motion is a Flashcard, which is free. As  they develop more words in their dictionary, they can offer updates for a small fee.

“The sign language interpretation technology they are developing could be revolutionary,” says Richard DeMartino, director of the Simone Center for Student Innovation and Entrepreneurship and the team’s coach. “It could serve as a core  technology for a variety of unique products ranging from sign language educational tools to sign-to-speak translation systems.”

Hait-Campbell says the Summer Start-up Program “has given me a lot  more critical thinking. It’s changed my  life. It gave us a year’s worth of business courses in 10 weeks.”

The team has been asking potential donors to invest in MotionSavvy and will apply for grants. They’ll need money to expand the product for the next five years to accomplish some of their goals, including expanding its sign language database with up to 20,000 signs.

“We’ll need money for research and development, having it mass produced, how we can improve the existing service and how other markets can be approached,” Opalka says.