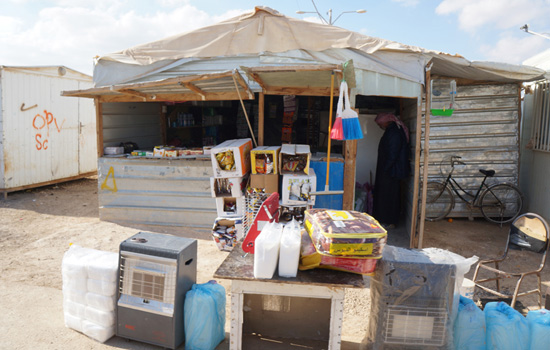 Pictured is a convenience store on the refugee camp’s main street, which has been dubbed the Champs Elysees. The shops and infrastructure can change every day, making it difficult for relief workers to navigate the camp and provide assistance.

Brian Tomaszewski hopes to make riots, fires and sand storms a little easier to manage at the Zaatari Syrian refugee camp in Jordan.

The assistant professor of information sciences and technologies at Rochester Institute of Technology spent a week of his winter break in Jordan, looking at how geographic information systems (GIS) and mapping can be used to mitigate potential emergency and disaster situations that threaten life at the refugee camp. The trip was part of a collaborative National Science Foundation (NSF)-funded project to examine the camp’s current infrastructure, look at ways to improve it and apply those ideas to other refugee camps.

Zaatari was opened in 2012 as a result of the ongoing Syrian civil war. With more than 80,000 residents, it is considered the world’s second largest refugee camp.

“The camp was established so quickly that it lacks the critical disaster and emergency prevention infrastructure that major cities need to have,” said Tomaszewski. “The streets and buildings are also constantly changing, which makes it harder for relief workers to provide basic services for the residents.”

During his three days in the camp, Tomaszewski met with members of the United Nations High Commissioner for Refugees (UNHCR), the organization that runs the camp along with representatives from Jordan. They described their challenges with using static maps that do not reflect the dynamic nature of the camp.

“They would send workers out to fix a sewage line and find that the manhole had been moved two days earlier to create a new road,” Tomaszewski said.

He plans to develop a system and process for workers to use high-resolution satellite imagery with change detection algorithms. These tools, which include GPS and OpenStreetMap, will create maps that can be updated every couple days. He also sees a need for micromapping—very detailed maps that include building entrances, streetlamps, restrooms and more.

“It’s important to know where all the first aid areas are, or where the power lines are accessing each building,” said Tomasewski. “Knowing the exact locations of specific structures and seeing them on a map can be critical to saving lives in an emergency situation.”

Tomaszewski is one of seven collaborators on the NSF-funded project, which also examined the Internet and mobile phone use of camp residents. Other colleges involved with the project include Penn State University, University of California Santa Barbara and the University of Washington.

Danny Iland, a 2011 RIT B. Thomas Golisano College of Computing and Information Sciences computer science alumnus who is currently a Ph.D. student at UC Santa Barbara, was among the researchers who visited the refugee camp. Iland worked with a fellow doctoral student to evaluate wireless and cellular network strengths in the camp.

“It was an amazing opportunity to meet the dedicated people who are working in the camp and to meet Syrian refugees themselves,” said Tomaszewski. “Ideally, our research can help improve—if even a little—the situation of both these groups of people.”

Tomaszewski plans to go back to Zaatari this summer with the group to implement the micromapping and satellite imagery. To learn more about the project, go to the National Science Foundation: Award page website. 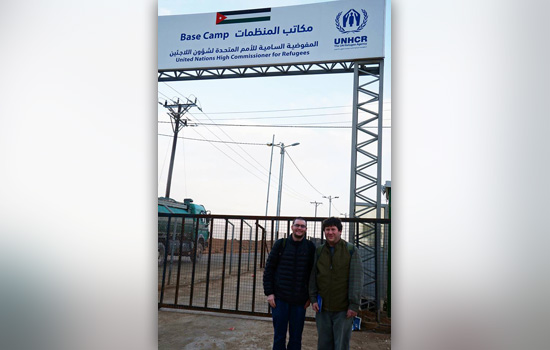 Brian Tomaszewski, an assistant professor of information sciences and technologies at RIT, conducted geographic information systems (GIS) research at the Zaatari refugee camp in Jordan. Tomaszewski, right, stands with Danny Iland, a RIT computer science alumnus and Ph.D. student at the University of California Santa Barbara, who also worked on the NSF-funded project.