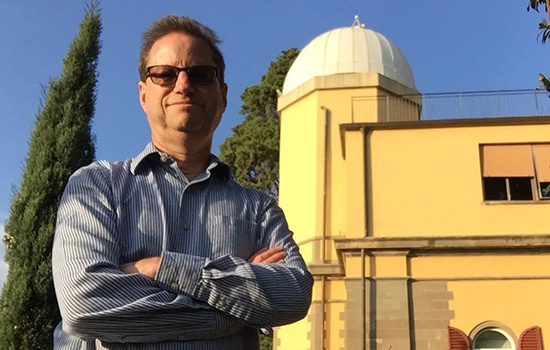 Rochester Institute of Technology professor Joel Kastner is broadening and deepening his research program on the origins of our solar system and planetary systems orbiting other stars while on four consecutive fellowships and visiting positions during his sabbatical this academic year.

Kastner, professor in RIT’s Chester F. Carlson Center for Imaging Science and the School of Physics and Astronomy, is the Study Abroad International Faculty Fellow for the month of November at the Arcetri Observatory in Florence, Italy. He is collaborating with former RIT postdoctoral fellow Germano Sacco and other Arcetri scientists to identify and study young stars within a few hundred light years of the sun using newly available data from the European Space Agency’s Gaia space telescope.

He was also awarded two additional fellowships for 2017—the prestigious Merle A. Tuve Fellowship from the Carnegie Institution for Science Department of Terrestrial Magnetism in Washington, D.C., for his six-week residency there, starting in January 2017; and a Smithsonian Institution Short Term Visitor fellowship for his residency at the Smithsonian Astrophysical Observatory in Cambridge, Mass., in March and April 2017.

Prior to his residency in Florence, Kastner spent two months as a visiting astronomer at the Institut de Planetologie et Astronomie de Grenoble, or IPAG, in France, studying the compositions of planet-forming disks around young stars in a collaboration with scientists there who work in the areas of interstellar and solar system chemistry.

“The astrophysicists at IPAG, Arcetri, Carnegie and the Smithsonian Astrophysical Observatory are combining observations with the world’s most powerful astronomical facilities with sophisticated computer modeling to attack the complex problem of how planetary systems, including our own solar system, have come into being,” Kastner said. “I feel very fortunate to be able to work so closely with so many ‘black belt’ astrophysicists during one sabbatical year.”