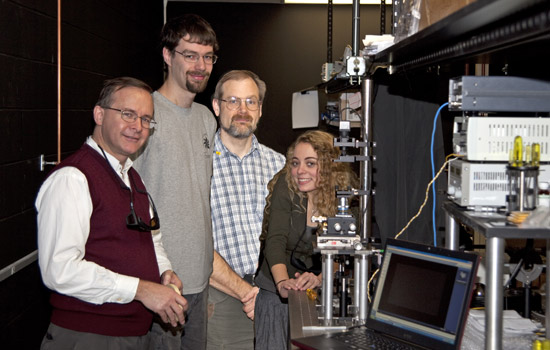 Grover Swartzlander, left, led an RIT research team that has proven the existence of stable optical lift—the use of a beam of light to move and manipulate particles (similar to how air is used to achieve airplane flight). Also pictured are Timothy Peterson, second left, a master's student in computer science; Alan Raisanen, associate director of RIT's Semiconductor and Microsystems Fabrication Laboratory; and Alexandra Artusio-Glimpse, right, a doctoral student in imaging science.

A team of researchers from Rochester Institute of Technology has proven the existence of stable optical lift—the use of a beam of light to move and manipulate particles in the micrometer scale (similar to how air is used to achieve airplane flight).

The technique has significant applications in a host of fields, including biotechnology, astrophysics, and microelectronics, and it eventually could be used to power micro-machines or enable long-distance space travel.

“Airplanes and automobile spoilers use the concept of aerodynamic lift to achieve movement,” notes Grover Swartzlander, joint associate professor in RIT’s Department of Physics and the Chester F. Carlson Center for Imaging Science. “Our computer model predicts and our experiments prove that sustained optical lift is possible and can be used to make particles move perpendicular to the direction of the light flow. Combined with the previously known ‘levitation force’ of light, the specially shaped particles can be made to  ‘fly.’ ”

Swartzlander’s team first developed computerized simulations to test the process and then created a laboratory experiment using milliwatt-scale laser light and microscopic semi-cylindrical rods. As expected, when illuminated with the laser light, the rods exhibited both a “levitation force” in the direction of the beam and a “lift force” perpendicular to the beam.

The rod also rotated into a stable orientation and subsequently underwent uniform motion. Unlike optical tweezers, which is an alternative method to manipulate particles with a focused beam of light, optical lift occurs in a uniform illumination. Numerous rods could be simultaneously lifted and moved in a single uniform beam of light.

Swartzlander says the same force could be used to power micro-motors in biomedical devices or provide a means to steer solar sails designed to send crafts deep into space.

The team also included Alan Raisanen, associate director of RIT’s Semiconductor and Microsystems Fabrication Laboratory; Timothy Peterson, a master’s student in RIT’s Department of Computer Science; and Alexandra Artusio-Glimpse, a graduate of the RIT photographic technology program and a current doctoral student in the Center for Imaging Science.