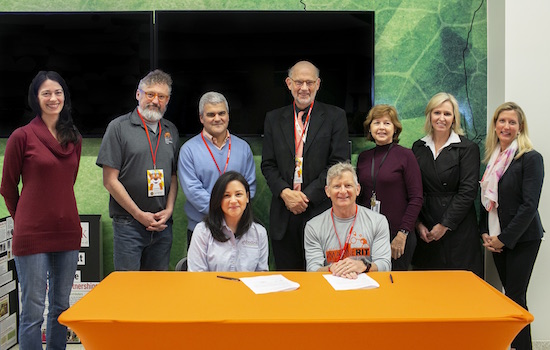 Rochester Institute of Technology and Foodlink Inc. have signed a formal agreement, strengthening their partnership and creating opportunities for new collaborative efforts in the fight against hunger in the region.

Jeremy Haefner, RIT provost, and Julia Tedesco, Foodlink executive director, signed a memorandum of understanding at the Imagine RIT: Innovation and Creativity Festival on April 28. The closer working relationship outlined in the agreement supports the development of mutually beneficial programming initiatives, opportunities for experiential learning for students via internship or co-ops, collaborative scholarship and grant proposals.

“I think the partnership between RIT and Foodlink is a fabulous one not only for Foodlink, because they will get the power of our students working for them, but for our students themselves,” Haefner said. “This is a great opportunity for experiential learning, where they dive in and learn about how the real world works in the area of food distribution and dissemination.”

Added Tedesco: “We’ve have the good fortune of partnering with RIT for years through volunteer opportunities, group projects and various internships. This is a really natural and exciting next step in the partnership and, I think, will create a lot of opportunity for Foodlink to learn and for RIT students and faculty to engage in a community-based organization.”

A recent collaboration gave students and faculty in RIT’s Wegmans School of Health and Nutrition in the College of Health Sciences and Technology and the College of Liberal Arts an opportunity to pilot a federally funded program encouraging the purchase of vegetables at Foodlink’s Curbside Market.

Attending the event were James Hall, executive director of RIT's School of Individualized Study; James Winebrake, dean of the College of Liberal Arts; Dr. Daniel Ornt, vice president/dean of the Institute/College of Health Sciences and Technology; and Heather Newton, director of development and community engagement at Foodlink.

“Experiential learning is the hallmark of President Munson’s vision of our becoming the preeminent career-focused institution in the world,” Hall said. “We can’t achieve this goal without high-quality community partners who provide students with a range of problem-solving and service opportunities. Foodlink’s reputation and ambition is a perfect partner for RIT.”

Added Winebrake: “The RIT-Foodlink partnership will provide opportunities for our students and faculty to address important food security, nutrition and hunger issues throughout our community.”