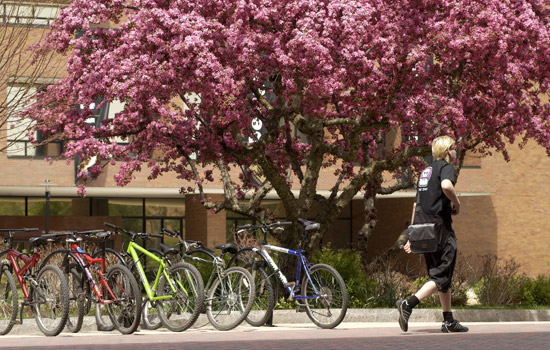 Completion of the Climate Action Plan is result of RIT’s participation in the American College and University Presidents’ Climate Commitment, a pledge by academic leaders to move their campuses toward climate neutrality, through more sustainable programs and practices.

President Bill Destler signed the commitment in 2009 and, in November 2010, the American College and University Presidents’ Climate Commitment appointed Destler to its steering committee.

“This plan is a result of the collaboration from several faculty and staff members over the last year and reinforces RIT’s commitment to sustainability,” Destler says. “RIT is working to be at the forefront of sustainability and we are proud to be a part of this great initiative.”

The initial plan establishes a framework for RIT to achieve climate neutrality by 2030. The plan will be updated every two years with increasing metrics and details on the university’s progress.

“While significant, this is only part of our continued efforts to establish a sustainable campus, which can serve as a living laboratory and a model of best practices both in and outside of the physical classroom,” says Enid Cardinal, senior sustainability adviser to the president at RIT.

RIT has several academic programs as well as campus-wide initiatives in place. Adding to a number of already existing degree programs related to sustainability, this fall a new Master of Architecture program focusing on sustainability, accepted its first class of students. The university has also committed to green building practices on campus as evidenced by several LEED-certified buildings including the “Platinum” University Services Center and the currently under construction Golisano Institute for Sustainability, which also aims to be LEED Platinum certified.