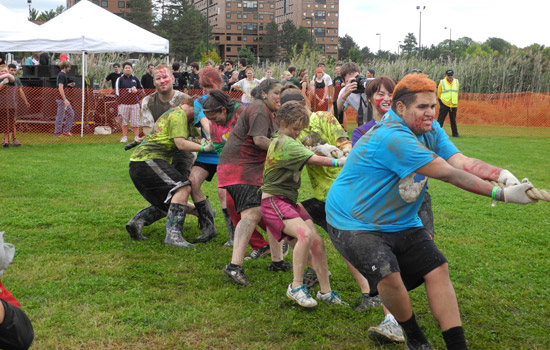 RIT unofficially broke the world record with 1,647 tuggers at this year’s Mud Tug tournament on Sept. 22.

RIT students competed in the world’s largest tug-of-war tournament Sept. 22, working to set a Guinness World Record. At the 17th annual Mud Tug, RIT unofficially broke the world record with 1,647 tuggers, beating the previous record of 1,290, set by students in the Netherlands in 2010.

“We wanted to get more people involved and thought that attempting to break the world record for largest tug-of-war tournament would help us do so,” says Jenna Deutsch, a fourth-year advertising and public relations major and president of Zeta Tau Alpha. “We actually broke it last year, but didn't fill out any paperwork—so we knew it was possible!”

RIT is awaiting confirmation from Guinness World Records to verify the record has been broken.

The first match of the tournament featured the “RIT Dream Team,” which included RIT President Bill Destler, RIT’s mascot Ritchie, and Student Government President Taylor Deer among others. Rochester Mayor Thomas Richards was also in attendance, proclaiming the day as Mud Tug Day in Rochester. By the end of the day more than 150 teams were covered in mud and RIT had broken a world record.

RIT’s Phi Kappa Psi and Zeta Tau Alpha Greek organizations host the annual tug-of-war event every year between teams of 10 competing in male, female and co-ed brackets. The event features five mud pits, which help to emphasize the event’s motto, “the winners celebrate and the losers take a mud bath.”

While the tournament may be dirty, it’s for a good cause, with all proceeds going to Hillside Family of Agencies. Phi Kappa Psi and Zeta Tau Alpha have been building a relationship with Hillside since 2010 and are working to strengthen the bond that RIT and Hillside already share. RIT’s connection with Hillside’s Work Scholarship program dates back to President Emeritus Albert Simone’s desire to work closer with Hillside to offer opportunities to students who are disadvantaged and now provides up to $300,000 each year in scholarships.

“The combination of school spirit and everyone working together for a good cause is emblematic of what RIT is all about,” Destler says.

Mud Tug raised $11,000 last year and Deutsch hopes that this year’s world record numbers will bring in even more donations.

For more information about Mud Tug, go to ritmudtug.com.