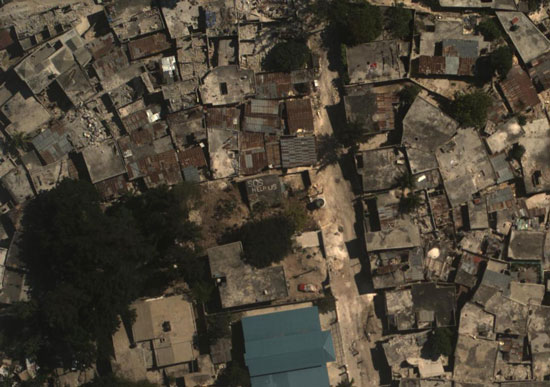 RIT scientists are surveying the damage in Haiti with high-tech sensors integrated into a small aircraft. They are using the data to produce information maps for relief and recovery agencies.

In the aftermath of the Jan. 12 earthquake that struck Haiti’s capital, Port-au-Prince, scientists from Rochester Institute of Technology are sweeping the leveled city with high-tech imaging integrated into a small aircraft.

Funded by the World Bank, and in collaboration with ImageCat Inc., the five-day flight is meticulously mapping the disaster zone to aid in crisis management and eventual reconstruction of the city. The twin engine Piper Navajo, operated by Kucera International, an Ohio-based aerial mapping company, will fly from Aguadilla, Puerto Rico, and refuel daily in the Dominican Republic. The plane flies at 3,000 feet over Port-au-Prince and other areas badly hit by the earthquake. The operation began Jan. 21.

Recovery crews will use the information in the reconstruction of Haiti. RIT is coordinating closely with the Federal Emergency Management Agency, the National Oceanic and Atmospheric Association, the U.S. Geological Survey and non-governmental organizations that want to make use of this unique data set.

Thermal imaging provides relief and recovery agencies with critical insight not available from standard color photography. “You can tell how much liquid is in a storage tank with a thermal camera,” says Don McKeown, scientist in RIT’s Chester F. Carlson Center for Imaging Science and project manager. “You can make inferences of tanks that are full, tanks that are empty and tanks that are leaking.”

The LIDAR capability detects and measures collapsed buildings and standing structures damaged by the earthquake. At the request of the U.S. Geological Survey, Faulring is using LIDAR to map the fault line to estimate how much the earth moved. This information is critical to refinement of earthquake-risk prediction models.

Following each flight, Faulring transfers data from the equipment on the plane to a hard drive. He sends the data back to his colleagues at RIT using Internet access provided by the University of Puerto Rico (UPR) at Mayagüez with the help of professor Miguel Velez. NYSERNet, a non-profit Internet service provider, temporarily made available an unrestricted Internet2 pipe for the purpose of transferring files from Puerto Rico to Rochester. Brent Bartlett, imaging science staff researcher at RIT, also provided assistance transferring data collected in Haiti.

“This has been a huge team effort between RIT and a host of collaborators,” says Jan van Aardt, associate professor of imaging science and director of the Laboratory for Imaging Algorithms and Systems at RIT. The laboratory within RIT’s Carlson Center for Imaging Science developed the sensor system and is working closely with RIT’s Digital Imaging and Remote Sensing group to explore applications. “If it had not been for this close-knit collaboration between the two teams, we never would have pulled this off,” van Aardt adds. “Next steps will include collaborative product development to aid the relief effort.”

Scientists and graduate students are working overnight at RIT in the Information Products Laboratory for Emergency Response (IPLER), a partnership between RIT and the University of Buffalo, to process the data and make it available to a worldwide audience. The image maps are posted online on UB’s Virtual Disaster Viewer and sent to servers at Google, Yahoo!, Microsoft, United Nations, USGS and ERDAS, a software developer of remote sensing applications.

“The National Science Foundation-sponsored IPLER project, which has as a goal increased flow of knowledge needs between disaster responders, technologists and researchers, has been instrumental in igniting this effort,” van Aardt says.

Industry partners reinforced the efficacy of the Information Products Laboratory for Emergency Response. McKeown’s suggestion to help in the Haiti crisis management effort met with quick response from Kucera International, which provided the plane and two pilots, and Ron Eguchi from ImageCat Inc., an international risk management innovation company, who facilitated funding from the World Bank and is the prime contractor.

“We knew the capabilities of the technology,” says McKeown. “It’s more of an issue of what we could cover and when.”

A few near show-stopping hurdles dogged the mission and the crew’s ability to fly over Haiti from the start. Leaving the country with the necessary technology was the first obstacle. RIT had obtained an export license from the U.S. Department of State with Department of Defense approval due to the military potential of the technology. The thermal infrared cameras and precision navigation system are export controlled under the International Traffic in Arms Regulations. A second critical obstacle was getting clearance from the Haitian government to fly over its airspace. This obstacle was overcome thanks to coordination by the United States Air Force and the assistance of Congressman Eric Massa.

McKeown sums up the overall effort: “The commitment and ingenuity of those working to bring this support to the people of Haiti has been truly amazing at all levels. From faculty, staff and students at RIT, to the pilots from Kucera, the support of members of our local congressional delegation, and the personnel at U.S. Southern Command. Everyone has pulled together in a way that makes you proud to be an American.”

Support from RIT’s remote sensing program has received congressional support since its inception. Most recently, Congressmen Chris Lee and Dan Maffei have secured funding for the program in the 2010 federal budget in the Homeland Security bill. This funding will directly build on the IPLER project activities and increase RIT’s ability to better respond to future disasters.

“The imaging system in use by RIT scientists in Haiti is a real-life example of how this powerful technology can aid the recovery and reconstruction efforts in disaster areas,” says Lee. “Having recently been to RIT to see the technology in person, it’s clear how this high-resolution color imagery system will allow researchers to pinpoint emergency situations under mounds of rubble, as they are doing this very day in Haiti. I am proud to see this collaboration between RIT, the University at Buffalo and the World Bank to come together and do whatever they can to help those in need.”

Adds Maffei: “When I worked with my colleagues to secure this funding, I knew the work RIT’s remote sensing program did was remarkable, but I never imagined this would be its mission. I applaud the commitment of the entire team who are assessing the damage from the horrific earthquake in Haiti. Your input will be incredibly valuable as the rebuilding effort gets underway.”

Additional support from Congressman Massa has helped directly with RIT’s efforts to aid the relief effort in Haiti with imagery. He provided the RIT team with assistance in rapidly obtaining an export license, valuable insight into operational issues based on his prior military experience and helped with coordination with the U.S. military, McKeown says.

“On behalf of the House of Representatives, I want to thank RIT for helping lead the technological effort to improve our rescue operations in Haiti,” says Massa. “The earthquake that hit Haiti is a serious humanitarian crisis and I’m glad to have RIT involved in the relief effort.”

Rochester Institute of Technology is internationally recognized for academic leadership in computing, engineering, imaging technology, and fine and applied arts, in addition to unparalleled support services for students with hearing loss. Nearly 17,000 full- and part-time students are enrolled in more than 200 career-oriented and professional programs at RIT, and its cooperative education program is one of the oldest and largest in the nation.

For two decades, U.S. News & World Report has ranked RIT among the nation’s leading comprehensive universities. RIT is featured in The Princeton Review’s 2010 edition of The Best 371 Colleges and in Barron’s Best Buys in Education. The Chronicle of Higher Education recognizes RIT as a “Great College to Work For.”