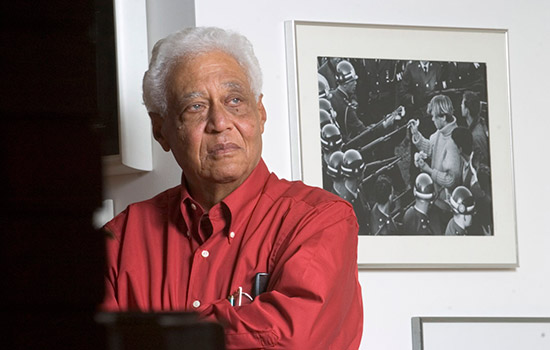 Portrait of Bernie Boston with his iconic photograph, Flower Power, in the background.

This week marks the 50th anniversary of the day RIT alumnus Bernie Boston ’55 captured “Flower Power,” an iconic photo that would become emblematic of 1960s counterculture and anti-Vietnam War movements. The late Boston photographed protester George Harris placing carnations in the gun barrels of a National Guard detail during an antiwar demonstration at the Pentagon on Oct. 21, 1967, and the photo earned him a Pulitzer Prize nomination.

The RIT Archives will commemorate the anniversary with a pop-up exhibition on the RIT campus on Thursday, Oct. 19, at the following times and locations:

Event organizers will have a large print of the photo on display, pass out carnations and stickers, explain the photo’s significance in the anti-Vietnam War movement and play music from the era.

“We wanted to do something memorable to celebrate the anniversary because this is a great image that people instantly recognize, Bernie Boston was an RIT alumnus and RIT holds an archive of his distinguished work,” said Becky Simmons, RIT Archivist. “The image is still relevant, especially this year with all the protests and the importance of people expressing their First Amendment rights in the United States. Ken Burns’ The Vietnam War just came out and it’s still very much on people’s minds.”

RIT faculty will further explore the photo during a panel discussion at the University Gallery from 9:30 to 11 a.m. Thursday, Nov. 2. The panel will include associate professors of history Tamar Carroll, Joseph Henning and Michael Brown as well as Jennifer Poggi, assistant professor of photography.

The RIT Press released a retrospective look back at Boston’s work in 2006.