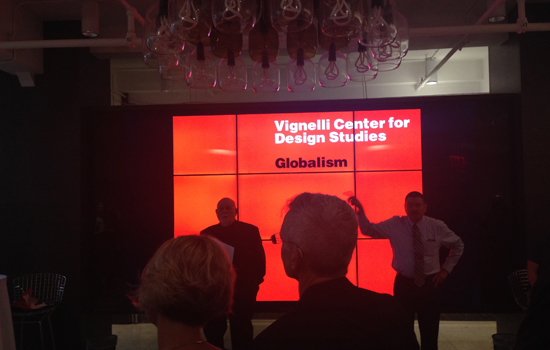 Roger Remington, RIT’s Vignelli Distinguished Professor of Design, speaks to nearly 100 faculty, staff, students and alumni who gathered in New York City May 14 to mark the fifth anniversary of the Vignelli Center for Design Studies on the Henrietta campus.

Nearly 100 Rochester Institute of Technology faculty, staff, students and alumni gathered in New York City on May 14 to mark the fifth anniversary of the Vignelli Center for Design Studies on the Henrietta campus.

The iconic work of the late Massimo Vignelli and that of his wife, Lella, is permanently archived at the Vignelli Center, which opened at RIT in late 2010.

“Tonight we celebrate five years of continuing the Vignelli design legacy at the Vignelli Center for Design Studies at RIT,” said R. Roger Remington, RIT’s Vignelli Distinguished Professor of Design. “The Vignelli Center is a campus-wide advocate for design excellence. At the groundbreaking in 2008, President Destler said, ‘The creativity that is at the heart of a designer’s work is also invaluable to driving innovation in other fields.’”

At the formal dedication of the Vignelli Center in 2010, Remington added, “Massimo set the course for the center when he said, ‘We hope our legacy is to make better professionals, more qualified designers.’”

Among the well-known creations of the internationally acclaimed designers were the New York City subway map; the Handkerchief Chair; the interior of St. Peter’s Lutheran Church in New York City; as well as the corporate identity programs for Xerox and American Airlines; and the packaging programs for Bloomingdales and Saks Fifth Avenue, to name a few.

The RIT archive of the Vignellis’ design work over their 40-year career, along with an extensive collection of original source materials, serves as an international resource accessible for study by RIT students, faculty and others. In addition to the archive storage areas, the nearly 19,000-square-foot Vignelli Center also houses the Benetton Gallery, which features “Design is One,” an exhibit comprised of select pieces of graphic design, product design and furniture from the Vignelli collection.

During its five years at RIT, the center has served as a hub for design education, scholarship and research, expanding the scope of the programs offered through the College of Imaging Arts and Sciences’ School of Design. The school offers degree programs in graphic design, industrial design, interior design, new media design and computer graphics design.

The Vignelli collection complements RIT’s 35 collections of Modernist American graphic design pioneers located in the Wallace Center’s Cary Graphic Design Archive. Pioneering designers such as Lester Beall, Will Burtin, Cipe Pineles, William Golden and Alvin Lustig, among others are represented in the archive. The university began acquiring these collections in the mid-1980s.

Through the Vignellis, RIT also has formed a partnership with Benetton Group and its internationally renowned social communication research center, Fabrica, headquartered in Treviso, Italy. Fabrica draws artists and designers from all over the world. The main exhibit gallery in the Vignelli Center, the Benetton Gallery, is named in honor of a major donation from the Benetton Group.

“In our first five years, one of the most significant events at the center were the times when Massimo and Lella were present to see their dream realized,” Remington said.