More than 500 eclectic performances and displays planned Sept. 12-22 in Rochester 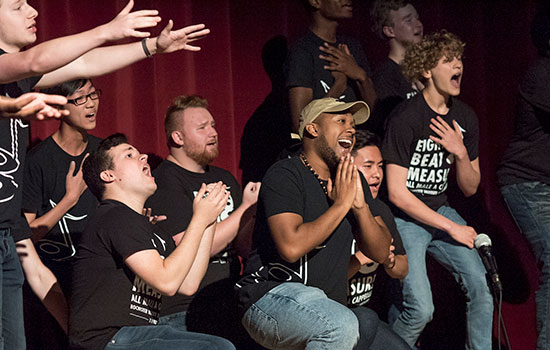 Rochester Institute of Technology students, faculty, staff and Osher members are part of an 11-day lineup of more than 500 eclectic performances in this year’s KeyBank Rochester Fringe Festival, Sept. 12-22 in Rochester.

RIT also is a major educational sponsor of the community collaborative event, now in its seventh year. The festival is a celebration of the performing and visual arts in more than 30 venues in downtown Rochester, featuring world-renowned performers as well as up-and-comers. More than 78,000 people attended last year’s festival.

More than 150 of the festival events are free, including all of the 39 RIT performances and exhibits, most which will be held at the Little Theatre, 240 East Ave.

RIT will provide free shuttlebus service to and from campus during the festival weekends.

Some of the RIT performances and exhibits include a showcase of locally-made video games, belly dancing, an exhibition of handmade masks, karaoke with puppets, and a one-man show describing what it means to be a black, deaf man.

Thomas Warfield, director of dance at RIT’s National Technical Institute for the Deaf, will show and discuss On the Way to Oz, his documentary film about diversity in the arts.

There will also be favorites from past years, including a cappella groups, poetry performed in American Sign Language, folk music performed by retired RIT President Bill Destler and his spouse, Rebecca Johnson, and highlights from RIT’s School of Film and Animation Honors Show.

“Creativity is in RIT’s DNA, and our participation in the Fringe Festival provides us with a great opportunity to showcase the many talented artists, performers and other creative individuals that are part of our campus community, as well as engage with the greater Rochester community in celebrating the vibrant City Center of Rochester,” said Deborah Stendardi, RIT’s vice president for Government and Community Relations.

“The arts bring people together, and there is nothing better than seeing the city streets filled with people from all parts of our community, as well as visitors from far and wide, enjoying all kinds of performances in a wide range of venues,” she said.

The RIT offerings at this year’s Fringe Festival include:

For a complete schedule of RIT Fringe events (and notations on interpreted performances) as well as the shuttle schedule to and from RIT, go to www.rit.edu/fringefest or contact RIT Assistant Vice President of Special Events Lynn Rowoth at 585-475-7408 or lynn.rowoth@rit.edu.