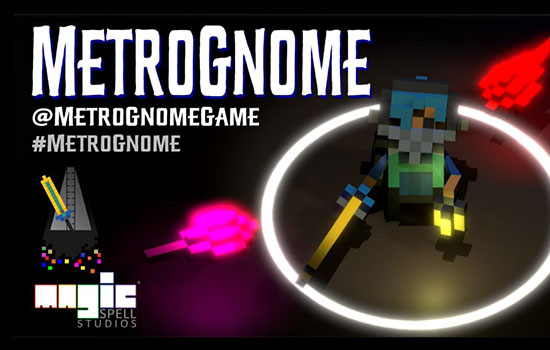 MetroGnome, a game created by RIT students, will be on display at the Game Developers Conference in San Francisco and will represent RIT in the Intel University Games Showcase at GDC ’18.

With Rochester Institute of Technology boasting some of the top programs in the world in game design and development in 2018, more than 100 RIT students, faculty, alumni and staff will travel to San Francisco this week to participate in the Game Developers Conference 2018, the world’s largest professional gaming industry event of the year.

“With the opening of our MAGIC Spell Studios building this fall, our designation as one of three New York State Digital Gaming Hubs, and our growing roster of published games, we believe the spotlight will be focused on RIT and the cutting-edge digital media projects our talented students and faculty are creating,” said Jennifer Hinton, chief communications officer of RIT’s MAGIC Spell Studios. “GDC is also an amazing opportunity for our students to make essential connections with those in the industry, sharpen their presentation and interviewing skills so early in their careers, and serve as ambassadors for RIT’s top-notch programs.”

The conference runs through March 23 and is a key learning and networking opportunity for both aspiring and professional game developers. Students attending the event will have access to hundreds of lectures, panels, tutorials and discussions given throughout the week by gaming industry leaders. In addition, GDC’s bustling expo floor features recruiters from virtually every major gaming company and provides developers with their first look at emerging industry software and technology.

RIT’s School of Interactive Games and Media will be hosting the fourth annual Prototype/Playtest Night at GDC from 7 to 10 p.m. March 20, at the Parc 55 San Francisco. The event is open to anyone in the game development community who wants to bring a work-in-progress to receive feedback from peers and those who want to play games and give feedback. The event typically features more than 100 video games, board games and card games.

Representatives from RIT’s MAGIC Spell Studios will be working the show’s expo floor, which opens March 21, and will have a booth featuring games created by RIT students and alumni, while students and faculty from the School of Interactive Games and Media will be promoting RIT’s academic programs by networking throughout the conference.

In fact, five of RIT’s game design and development master’s students have already arrived in San Francisco, via the annual Train Jam—a 52-hour video game building event held on an Amtrak train from Chicago to California. RIT students, faculty and staff will also attend several alumni gatherings that have been organized in conjunction with the conference.

Hinton also says that the games in production and on display demonstrate the range of development underway at MAGIC Spell Studios and the School of Interactive Games and Media.

RIT’s game design and development program was ranked fifth at the undergraduate level and seventh at the graduate level according to the 2018 international rankings from The Princeton Review. Two years ago, RIT launched a fully functioning studio that will move to a new 43,000-square-foot building this fall, was designated a New York State Digital Gaming Hub and was the first university to launch a student-created game on Xbox One.

Student-developed games will be showcased at GDC ’18. They are:

RIT News will be providing live coverage of GDC throughout the week. Stay tuned to our official Twitter and Facebook accounts; reference the hashtag #RITGDC18 for updates. The Intel University Games Showcase will also be live-streamed at http://twitch.tv.IntelGameDev/ on March 22.