RIT now among the top 100 universities in the U.S. 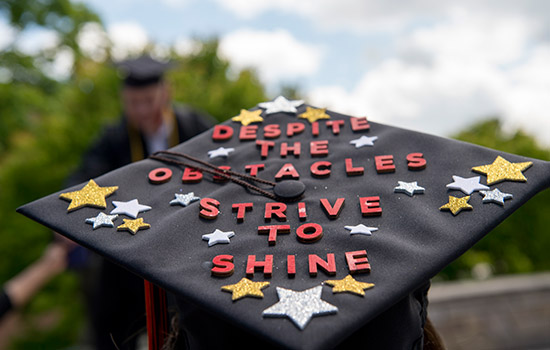 Rochester Institute of Technology is now among the top 100 universities in the nation, having jumped 10 places in the “National Universities” category, according to U.S. News & World Report rankings.

RIT, which just last year moved into the top “National Universities” category due to its rapid increase in research and Ph.D. graduates, this year ranked 97th out of 311 universities in this prestigious category, which includes some of the nation’s best known colleges and universities. These top universities “offer a full range of undergraduate majors, plus master’s and Ph.D. programs, and emphasize faculty research,” according to U.S. News.

“This ranking affirms what I’ve been saying all along: RIT is on a steep trajectory from greatness to preeminence,” said RIT President David Munson. “I’m very proud of everything our students, faculty and staff have done to help us achieve this milestone recognition, making us one of the top few universities that is working at the intersection of technology, the arts and design.”

The 2018 edition of U.S. News & World Report Best College also cited strong rankings for RIT’s Kate Gleason College of Engineering and Saunders College of Business. And the university was cited on lists for “A Focus on Student Success” for its internship programs, “Great Schools, Great Prices,” and “High School Counselor Top College Picks.”

This is the 35th year that U.S. News has issued these “Best College” ranks. Up until last year, RIT had been listed among “Regional Universities.” Overall, U.S. News cites 1,374 four-year colleges and universities in various categories. The rankings are based on several categories, with the most weight given to graduation and retention rates, assessment of excellence, faculty resources and student selectivity.

In this year’s ranking, RIT was: