More than 500 eclectic performances and displays planned Sept. 15-24 in Rochester 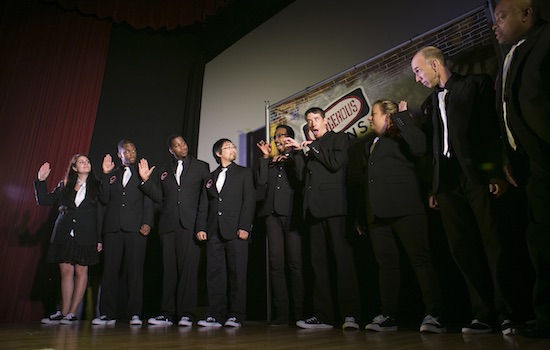 Rochester Institute of Technology students, faculty, staff, alumni and Osher members are part of a 10-day lineup of more than 500 eclectic performances in this year’s First Niagara Rochester Fringe Festival, Sept. 15-24 in Rochester.

RIT is a “founding higher educational partner” of this major educational sponsor of the community collaborative event, now in its fifth year. The festival is a celebration of the performing and visual arts in downtown Rochester, featuring world-renowned performers as well as up-and-comers.

All RIT-related events are free and will be held at Gallery r, 100 College Ave.; The Little Theatre and The Little Café, 240 East Ave. Performances at other venues may require tickets.

RIT-related events this year include a performance by Thomas Warfield, professor at RIT’s National Technical Institute for the Deaf and world-renowned dancer, singer, actor, choreographer, director, producer, educator, activist and poet, and performances by the RIT Ukulele Club, numerous student singing groups and dances from the Asian Culture Dance Crew and RIT Bhangra.

Another RIT attraction is Algorave Lite: Live Coding Algorithmic Dance Music, where musicians and coders create music by programming it in front of a live audience.

“RIT, which has a long tradition of educating students in a variety of artistic endeavors, has been a proud supporter of this festival since its debut,” said RIT President Bill Destler. “This festival gives us a chance to showcase our community as well as the many talented students, faculty and staff at our university, where we focus on producing graduates who excel in STEAM education – science, technology, engineering, arts and math.”

“One of RIT’s missions is innovation,” she said. “Fringe theater is innovation at its finest, so having students involved and exposed to a level of experimental and experiential theater opens new pathways for them.”

Here’s a sampling of other RIT festival Fringe offerings:

For a complete schedule of RIT Fringe events (and notations on interpreted performances), go to www.rit.edu/fringefest or contact RIT Assistant Vice President of Special Events, Lynn Rowoth, at 585-475-7408 or lynn.rowoth@rit.edu.