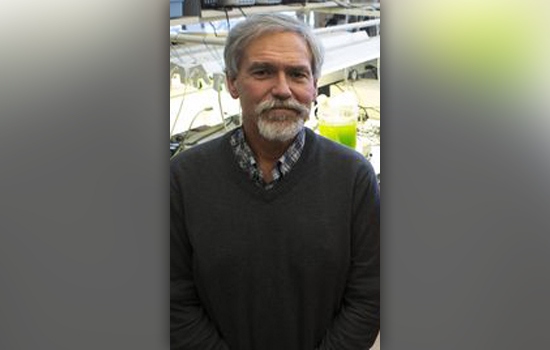 Rochester Institute of Technology and Synergy Biogas are exploring the environmental benefits of microalgae to clean agricultural wastewater and make biofuels.

Jeff Lodge, associate professor in RIT’s Thomas Gosnell School of Life Sciences, is running a three-month pilot program at Synergy Biogas, a high-tech anaerobic digester located on Synergy Farms in Covington, N.Y, to grow microalgae on digested biomass. Microalgae will consume contaminants in wastewater and produce an algal biomass that Lodge will use as a feedstock for renewable energy.

Lodge will grow the microalgae in a 1,000-gallon tank at Synergy in a process that can be scaled up to treat 52,000 gallons, or 200,000 liters, of wastewater a day. The trial project will demonstrate the organisms’ ability to consume ammonia, phosphorous and nitrogen from digested biomass and reduce contaminants below state-mandated levels. Lodge’s laboratory experiments with microalgae have reduced phosphorous in wastewater by greater than 90 percent to levels of 0.1 parts per million, exceeding the required 1 parts per million in New York.

“My research lab has moved from small scale laboratory experiments demonstrating the significant reduction in ammonia, nitrate, phosphate and coliforms in municipal wastewater to larger scale experiments both in the lab and onsite at wastewater treatment plants,” Lodge said.

Anaerobic digesters produce liquid fertilizers as a byproduct. Microalgae can further reduce phosphorous and other contaminants from the fertilizer to mitigate the impact of runoff into streams and rivers.

“We are truly excited about the opportunity to work with RIT on this innovative approach—it could be a game-changer toward reducing phosphorous loads—which would go a long way towards keeping the Great Lakes free of algae blooms,” said Lauren Toretta, president of CH4 Biogas, parent company of Synergy Biogas. “It increases the overall environmental benefit.”

Lodge and his team of RIT students will sample and analyze the effects of algae on the digested biomass throughout the summer.

The leftover algal biomass will be repurposed as a feedstock for renewable energy. Lodge and his students will reclaim the sludge to generate biofuels for cars and trucks. They will isolate lipids to make biodiesel and carbohydrates to produce bioethanol through yeast fermentations. The remaining biomass from lipid and carbohydrate extraction can be added to the anaerobic digester as a co-substrate or can be utilized as a fertilizer.

Lodge’s research investigates the effects of various microalgae to treat wastewater and the potential use of the algal biomass for energy production or in other potential markets.

Microalgae represent an alternative to the use of food feedstocks such as corn, used for bioethanol, and soybean, used for biodiesel, in biofuel production, Lodge said.