ROAR the Vote campaign hopes 60 percent of eligible tigers will cast a vote on Nov. 8 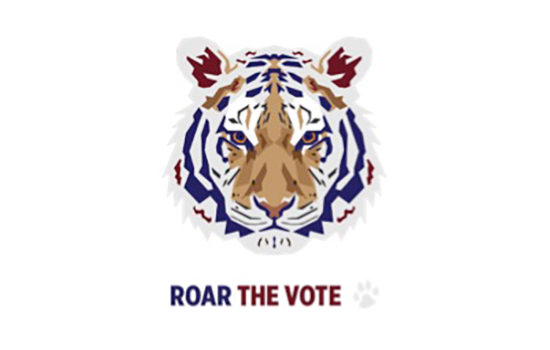 With a presidential election looming, leaders and students at Rochester Institute of Technology have begun a “ROAR the Vote” campaign of their own, hoping at least 60 percent of eligible RIT students will vote this year.

“College-aged students are millennials,” said Ben Suits Baer, a fifth-year individualized studies major who will be sending an absentee ballot to his home in Moorhead, Minn. “We are the largest percentage of American citizens right now and our numbers increase our voting power. Ten or 15 years from now, we will be the people running this country, so it’s important for them to know what’s happening in the country and the issues we are currently facing.”

Baer is one of several students and RIT administrators who made videos posted to the ROAR the Vote website to support student voting.

“Every vote does count,” said RIT President Bill Destler in his video. “In fact, we could well have a very close election coming up, and I think it would be important for all of us to exercise our right to have influence on that result. You grow up, and one of the things you have to do is you have to exercise your civil responsibility. And one of your civic responsibilities is to participate in our democracy.”

“Votes so clearly do count,” she said in her video. “That’s why politicians are spending so much money trying to get our vote. This election is the first election in which there are as many millennials as there are baby boomers, and they have a real potential for inserting a very powerful voice in this election.”

Alyssa Alleyne Atherly, a fifth-year information technology major from Brooklyn, said she registered to vote because it is important for her voice to be heard.

“You can’t complain about issues going on in your community and not say that you took any type of action or stand towards making a change,” Atherly said in her video.

RIT has partnered with TurboVote, a web-based service provided by the nonprofit organization Democracy Works Inc. Users may request voter registration materials and absentee ballots online and can receive reminders of election dates and poll closings.

The deadline to register to vote is Oct. 14.

Alternatively, students who consider their residence outside of Monroe County could request an absentee ballot from their home county. Deadlines for requests vary. In New York, absentee ballots must be postmarked by Nov. 1.

RIT will offer students a shuttle to and from the polls on Election Day from noon to 9 p.m., but will not suggest how they should cast their votes.

“This campaign isn’t about telling students who to vote for. That’s their decision. ROAR the Vote is about giving students the tools and information they need to register and vote,” said Kerry Foxx, director of RIT’s Center for Leadership & Civic Engagement, which is sponsoring ROAR the Vote with the Division of Student Affairs.

He said RIT faculty and staff are encouraged to discuss the initiative with their students, posters will announce the project and information tables will be set up through Oct. 14 to help answer questions.