RIT Racing to compete in Hungary 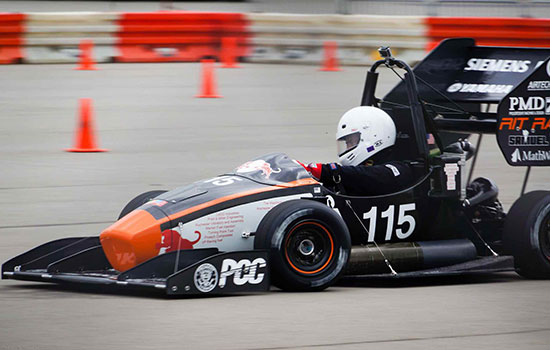 RIT’s Formula Racing team will head to Budapest, Hungary this summer to compete for the first time in Formula Student East, a major collegiate racing competition. RIT Racing will also be the only American entry for the competition taking place July 20-23, 2017 at the Euro-Ring Circuit. More than 115 collegiate race teams from 28 countries are expected.

Formula Student East is only one event on the schedule as the team celebrates its 25th anniversary of national and international competitions, and highlights its successes since it first began racing in the early 1990s.

“Some of the best, most competitive Formula Student teams from Europe will compete in Budapest,” said Jon Washington, 2017 project manager for RIT Racing. “We’re really looking forward to heading back to Europe for competition. These trips allow us to validate a year’s worth of hard work against some of the best teams in the world.”

Washington, a fifth-year mechanical engineering major from Upper Marlboro, Md., oversees the 50-plus students on the team, coordinating the racecar build process, budgets, logistics and travel. Building the car is critical, he added, but Formula competitions also demand that student-competitors discuss the design process and business workings as if they are an actual enterprise.

Many groups need to come together to complete the critical tasks required to operate at an RIT level of quality and execution. Building two racecars for the first time ever is no small task according to Pat Burke, the race team’s chief engineer, who said he knows firsthand the difficulties involved.

“Building two cars requires extreme flexibility,” said Burke, a fifth-year mechanical engineering student, from Lexington, Mass. “Nearly every team member has had to take on additional tasks to ensure projects are completed ahead of deadlines. It’s been a great learning experience for both veteran and new members, simply because of the challenges presented from building two cars.”

The 2017 season will be a year of firsts for RIT Racing. It will field two racecars, one a traditional gasoline-powered model, with the other an all-electric vehicle. Both vehicles are currently under development, and will be formally unveiled at the annual Imagine RIT: Innovation and Creativity Festival on Saturday, May 6. That day, F1, the original car from the 1991-92 season, will join the parade of motorsport team vehicles at the festival. F1 is currently being refurbished by Salvatore Fava ’16 (mechanical engineering), a long time member of the team and last year’s project manager.

RIT Racing competes in Michigan, May 10-13 and Formula North in Ontario, Canada, June 1-4 before heading to Budapest in July. The electric car, E1, competes for the first time at Formula North.

Each year all of RIT’s competitive race teams—RIT Racing, RIT HotWheelz, RIT Baja, RIT EVT and RIT Clean Snowmobile—showcase their vehicles at Imagine RIT prior to competitions taking place in the U.S. and abroad.