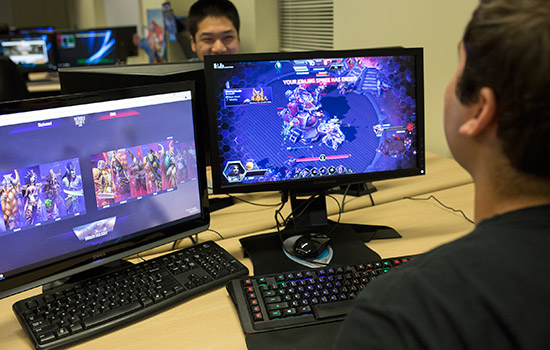 Animation Career Review ranked RIT as the top game design school on the East Coast and second best school in the nation.

Animation Career Review has again named Rochester Institute of Technology the top game design school on the East Coast. RIT also ranked second on the list of Top 50 Game Design Schools in the U.S., moving up from third in 2017.

“RIT is a special place for learning game design because of its burgeoning collaborations in all forms of games and interactive media that are developing throughout the university,” said David Schwartz, director of RIT’s School of Interactive Games and Media (IGM). “In fact, games belong to everyone and working across the huge variety of academic programs at RIT will benefit everyone and advance the entire field.”

“As the new MAGIC building opens this year, RIT will have a pipeline of students spanning design, expression, computing, art, music, writing, entrepreneurship and more,” said Schwartz. “They will all learn and make games together.”

For the full game design school rankings, go to animationcareerreview.com/articles/2018-game-design-school-rankings.