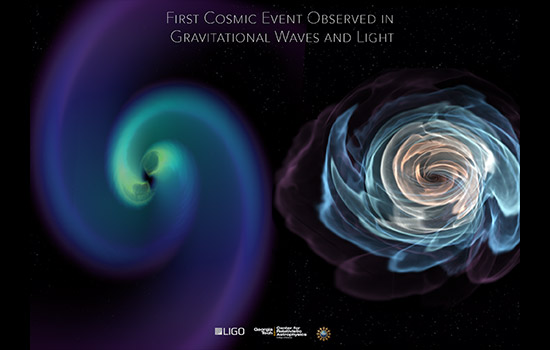 Rochester Institute of Technology researchers played a significant role in an international announcement today that has changed the future of astrophysics.

The breakthrough discovery of colliding neutron stars marks the first time both gravitational waves and light have been detected from the same cosmic collision.

“Multimessenger astronomy,” a new way of understanding the universe, will give us insight into how supernova explosions work, how gold and other heavy elements are created, how the nuclei in our body works and even how fast the universe is expanding.

“Multimessenger astronomy demonstrates how we can combine the old way with the new,” said Manuela Campanelli, professor and director of RIT’s Center for Computational Relativity and Gravitation. “It has changed the way astronomy is done.”

The breakthrough was made by the U.S.-based Laser Interferometer Gravitational-Wave Observatory (LIGO), the Europe-based Virgo detector and 70 ground- and space-based observatories.

“On Aug.17, the LIGO detectors observed two neutron stars spiralling into each other,” said John Whelan, associate professor and principal investigator of RIT's group in the LIGO Scientific Collaboration. “Two seconds later, the orbiting FERMI and INTEGRAL telescopes observed a burst of gamma rays. The LIGO and Virgo data gave us a location on the sky which agreed with the gamma-ray observations. We sent an alert out to dozens of observing partners who pointed their telescopes at that spot, and they saw a new light in a galaxy about 100 million light years away.”

The results resolve longstanding astronomical mysteries, said Richard O’Shaughnessy, assistant professor in RIT’s School of Mathematical Sciences, who was part of the LIGO team that measured the properties of the neutron stars.

Neutron stars—corpses of massive stars formed in supernova explosions—emit signals that can be observed by both gravitational-wave and traditional astronomy.

“This is like the Rosetta Stone for high-energy, multimessenger astrophysics,” O’Shaughnessy said. “It will bring unprecedented transformations in our understanding of the universe.”

The neutron star collision created a flash of gamma rays detected by the Gamma-ray Burst Monitor on NASA’s Fermi Space Telescope. The light was seen on Earth two seconds after LIGO-Virgo detected the gravitational waves. Signals of other forms of light, or electromagnetic radiation—X-ray, ultraviolet, optical, infrared and radio waves—were also detected.

“By seeing the flash of light and the gravitational waves associated with the merger, we were able to pin down precisely what it was, and that it made multiple things happen at the same time,” O’Shaughnessy said.

Gamma rays: These flashes of light are now definitively associated with merging neutron stars and will help scientists figure out how supernova explosions work, O’Shaughnessy said.

The initial gamma-ray measurements, combined with the gravitational-wave detection, further confirm Einstein’s general theory of relativity, which predicts that gravitational waves should travel at the speed of light;

The detection confirms the “kilonova” theory that material left over from the neutron star collision blows out of the immediate region and far out into space. Light-based observations show that heavy elements, such as lead and gold, are created in these collisions and subsequently distributed throughout the universe;

Cosmology: “Scientists now can independently measure how fast the universe is expanding by comparing the distance to the galaxy containing the bright flare of light and distance inferred from our gravitational wave observation,” said O'Shaughnessy.

RIT faculty in the LIGO Scientific Collaboration include Campanelli, O'Shaughnessy, Whelan, Carlos Lousto, Yosef Zlochower andHans-Peter Bischof. They are members of the Frontiers of Gravitational Wave Astrophysics, an RIT signature research initiative within the center, which supports research in multimessenger astronomy, and plays a leadership role in educating students and in developing space-based detectors.

The Findings of the LSC and the Virgo collaboration are published today in the journals Physical Review Letters, The Astrophysical Journal Letters, and Nature. Among the authors of today's papers are Lousto, O'Shaughnessy, Whelan, post-doctoral researcher James Healy, and several student researchers at the Center for Computational Relativity and Gravitation: Monica Rizzo, an undergraduate physics major; John Bero, an MS student in the astrophysical sciences and technology graduate program; and Ph.D. students in astrophysical sciences and technology (AST) Jacob Lange, Jared Wofford, Daniel Wysocki and recent Ph.D. recipient Yuanhao Zhang. Doctoral students Brennan Ireland (AST) and Nicole Rosato (mathematical modeling) are also members of RIT's group in the LSC.

Rizzo works closely with O’Shaughnessy on parameter estimation, a type of analysis that uses statistical methods to make predictions about the system that produced the gravitational waves.

“My favorite thing about this discovery is that it is the first of hopefully many of its kind,” said Rizzo, a physics major from Buffalo, N.Y. “From this single detection, we were able to make inferences about the neutron stars in this particular binary.”

Founded in 2007, the CCRG now includes tens of high-caliber faculty, research scientists, postdoctoral researchers, and an increasing number of graduate and undergraduate students across several departments and colleges. For more information, go to the RIT Center for Computational Relativity and Gravitation website.

LIGO is funded by the NSF, and operated by Caltech and MIT, which conceived of LIGO and led the Initial and Advanced LIGO projects. Financial support for the Advanced LIGO project was led by the NSF with Germany (Max Planck Society), the U.K. (Science and Technology Facilities Council) and Australia (Australian Research Council) making significant commitments and contributions to the project.

The Virgo collaboration consists of more than 280 physicists and engineers belonging to 20 different European research groups: six from Centre National de la Recherche Scientifique (CNRS) in France; eight from the Istituto Nazionale di Fisica Nucleare (INFN) in Italy; two in the Netherlands with Nikhef; the MTA Wigner RCP in Hungary; the POLGRAW group in Poland; Spain with the University of Valencia; and the European Gravitational Observatory, EGO, the laboratory hosting the Virgo detector near Pisa in Italy, funded by CNRS, INFN, and Nikhef.