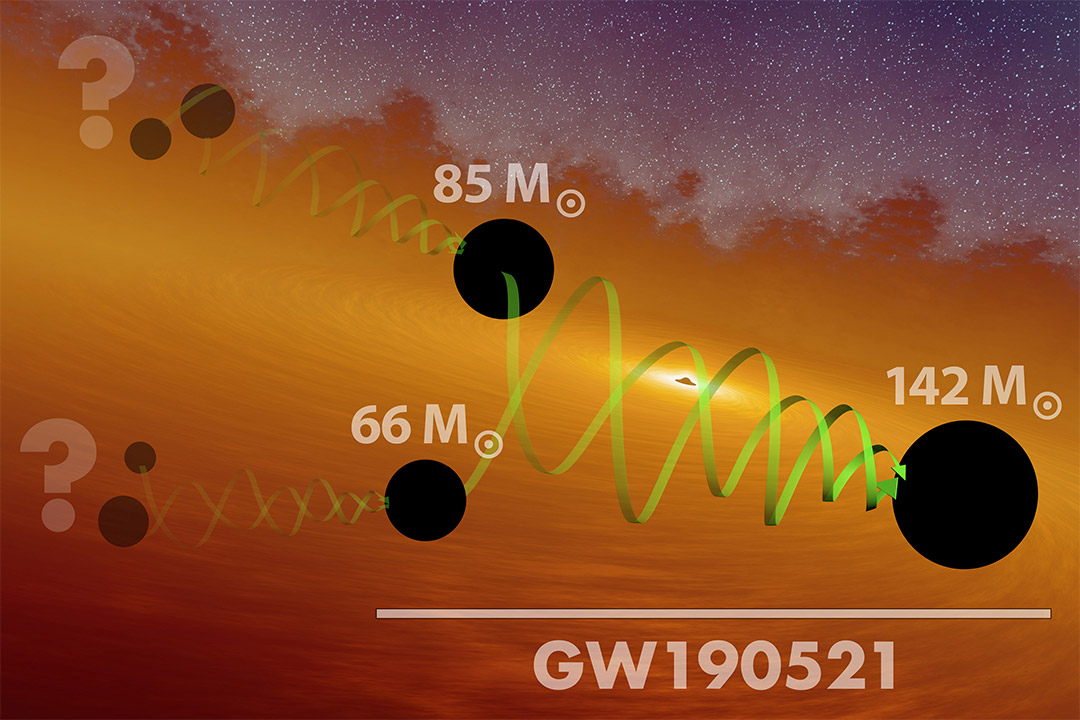 This artist's concept illustrates a hierarchical scheme for merging black holes. LIGO and Virgo recently observed a black hole merger with a final mass of 142 times that of the sun, making it the largest of its kind observed in gravitational waves to date. The event is thought to have occurred when two black holes of about 66 and 85 solar masses spiraled into each other and coalesced.

The LIGO Scientific Collaboration and the Virgo Collaboration recently announced the discovery of GW190521, the most massive gravitational wave binary observed to date, and Rochester Institute of Technology scientists played an important role in identifying and analyzing the event. They detected the signal with the National Science Foundation’s Laser Interferometer Gravitational-wave Observatory (LIGO). The two inspiralling black holes had masses of about 85 and 66 solar masses, and resulted in the formation of a black hole remnant of 142 solar masses, providing the first clear detection of an "intermediate-mass" black hole.

“We’re seeing something more massive than we’ve seen before, past the point where we thought that we could form black holes,” said Associate Professor Richard O’Shaughnessy, a member of CCRG and the LIGO Scientific Collaboration. “It’s therefore suggesting that our previous understanding was incomplete or maybe there’s more out there than we previously envisioned.”

Not only were the black holes in this event larger than those detected previously, the signal indicates that they could have been spinning about their own axes, at angles that were out of alignment with the axis of their orbit. The black holes’ misaligned spins likely caused their orbits to wobble, or “precess,” as they spiraled toward each other.

Jacob Lange ’20 Ph.D. (astrophysical sciences and technology) is a recent alumnus who contributed heavily to the analysis, using RIT-developed parameter estimation code and direct comparisons to numerical relativity simulations to estimate and corroborate the unique features of the event, including the masses and spin of the black holes. He said he is excited about the discovery because it challenges previous assumptions about black hole formation and raises important new questions about the fundamentals of how gravity works.

“We thought it would be almost impossible for us to measure precession at this high mass, but somehow we were able to do it and it’s not really clear why that was the case,” said Lange. “It’s not what we expected to be able to detect and hopefully we can learn a lot more from it.”

The discovery and its implications are outlined in two papers published in Physical Review Letters and The Astrophysical Journal Letters, and 10 researchers from RIT’s Center for Computational Relativity and Gravitation are listed among the authors. RIT’s contributions also included providing computer simulations of Albert Einstein’s equations by co-authors Professor Carlos Lousto and Research Associate James Healy used to compare the signal with and developing a waveform catalog.

While previous black holes detected by the European Virgo and the U.S. National Science Foundation LIGO are believed to have formed by collapsing stars, theory suggests that black holes with masses between 65 and 120 times the mass of the sun cannot be formed by this method. This perhaps means that intermediate black holes may form by another method, such as Pacman-like behavior where black holes grow by merging with smaller black holes.