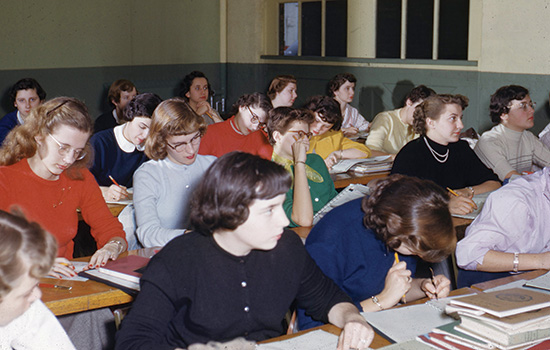 Students in class during the heart of RIT’s ‘Dress Neatly’ campaign, 1962.

In late 1961, RIT’s Student Government sponsored a “Dress Neatly” campaign to “encourage students to dress as men and women aspiring to professional careers.” Letters were sent to 20 different institutions requesting information on their school dress codes. llinois Institute of Technology requested that their students dress well at orientation and in the cafeterias, while administrators at Western Michigan determined that shorts were not allowed. Strict policies around proper dress for meals existed at several other schools, with men required to dress in pressed slacks, jackets and ties and women outfitted in dresses or skirts during dinner.

An editorial noted the RIT men’s Dorm Council had endorsed the idea of the campaign and wrote: “We feel the language used may have been a trifle extreme—but only a trifle. On the other hand, few of us can afford to dress as collegiate fashion plates. Between these two extremes lies a mode of dress that, while casual, is yet neat and clean. The salutary effects of soap, water and a clean  shirt are profound and dramatic.”

A follow-up letter to the editor hinted that the campaign had gone too far stating, “Some months back there was a campaign on campus against wearing sweatshirts and sneakers to class. While shirts and ties were advocated, a person can look neat in a sport shirt and pressed pants.”

While college fashion trends may seem an insignificant matter when consid-ering the history of RIT campus life, it is nonetheless interesting to see this campaign against the backdrop of the emergence of youth culture in this period. In 1961, life in the United States, and particularly that of college students, maintained the 1950s sense of prosperity and calm. However, an anti-establishment counterculture had been simmering as was evidenced by the emergence of rock and roll, teen films like Rebel Without a Cause, “beatniks” and Mad magazine’s satirical content. But this counterculture had not quite infiltrated the conservative milieu of RIT. The pages of Reporter are filled with the usual news about events and sports, tongue-in-cheek observations and sly witticisms. Little indicated that RIT students were restless or critical of the status quo. Dress remained basically as it had in the 1950s, with women continuing to wear skirts to class. It wasn’t until a few years later that RIT, along with other college campuses, would witness the onset of the hippies’ rebellious counterculture.