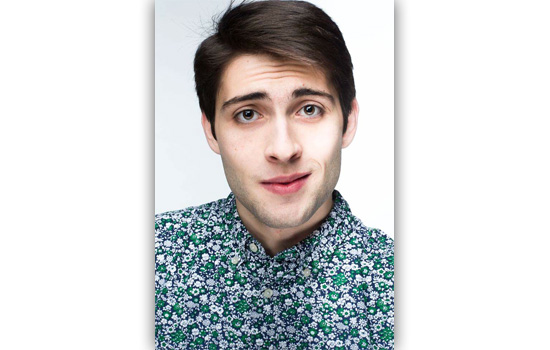 David Martellock, a third-year mechanical engineering student, will take the stage as Brad Majors in “The Rock Horror Show” this weekend. The musical takes Brad and his girlfriend, Janet Weiss, played by Ava Enoch, on a transformative journey with many unexpected twists and turns. Martellock, a Cazenovia, N.Y., native, is also a barista at Midnight Oil and lab instructor.

Question: What brought you to RIT?
Answer: When I was touring schools, I would always smile at the students I passed to see how many of them would return the smile warmly. I was looking for a campus where the students were open, creative and outgoing. I received the greatest response at RIT.

Q: What made you decide to audition for “The Rocky Horror Show?”
A: The first time I ever auditioned at RIT was last semester for “Jean de France.” One of my friends wanted me to come out so I auditioned and somehow got the lead. I loved the feeling of standing in front of people and embodying a story. This semester I was planning to audition for “The Rocky Horror Show” but I ended up having a packed semester so I showed up to auditions much more casually, again dragged by a friend. I hadn’t even been exposed to the Rocky Horror phenomonon before auditioning but it ended up working out. And without having seeing any previous iterations of the character, I could provide a new take on Brad.

Q: How would you describe the production?
A: The production is about counterculture and sexual deviance. It is a sexual journey of transformation and the exposure of Brad and Janet to a dark new world of absolute pleasure. The plot is convoluted with many random twists and turns.

Q: What is it like to play Brad?
A: Brad’s character is much more timid than I’m used to. He is a bit stuffy, very conservative and set in his ways. He is technically the hero, although Frank N. Furter, played by Ken Nepomuceno, is dedicatedly the star. Brad is the quintessential hardheaded science fiction male hero type, just dweeby and a bit oblivious. His character transforms a lot by the end of the musical. It’s interesting becoming an ultra straight-laced version of myself on stage.

Q: How does the audience play a role in the production?
A: It’s one of the only instances in theater that I have seen in which the audience can be a part of the action themselves. It is going to be fun interacting with them. They are almost a fifth member of whatever scene we are in because of how often they respond. We will be encouraging the audience to participate but with trepidation, as this is not the usual picture show and actors will be acting differently than expected. There is a song where I get completely soaked by water guns and I’m expected to maintain a straight face, which is fun.

Q: Why is performing arts important to you?
A: I love standing in front of a group of people and conveying something original and spontaneous. When people laugh at something I say or do, that feeling is so exhilarating and indescribable. Being able to bring joy and enlightenment to someone’s life is a pinnacle experience.

Q: What are some of your fondest memories at RIT so far?
A: Most of the RIT experience for me is the incredible variety of life we have here. Walking down the quarter mile you will always see someone dancing or dressed up in a costume. There is always something new, fresh and creative to see everyday here and I love that.