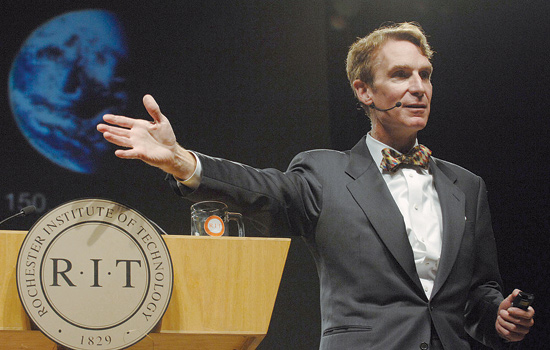 Bill Nye will return to RIT four years after participating in the Horton Distinguished Speaker Series to serve as keynote speaker for the 2012 commencement celebration.

Rochester Institute of Technology announces that Bill Nye, scientist and beloved TV personality, is the keynote speaker for RIT’s 127th commencement celebration. His address comes during Academic Convocation, which begins at 3 p.m. May 25 in the Gordon Field House and Activities Center.

As a scientist, engineer, comedian, author and inventor, Nye has made it his mission to foster a scientifically literate society. By making science entertaining and accessible, he strives to help people understand and appreciate how science makes the world a better place. He first brought his crusade to the RIT campus in 2008 as a presenter for the Frank Horton Distinguished Speaker Series.

“I want to inspire people to change the world,” he told an RIT audience during his visit. “To me, there’s nothing more exciting and more fun than science.”

Nye’s TV show, Bill Nye the Science Guy, originally ran on public television from 1992 to 1998. Donning a white lab coat and aided by flashy video effects and his offbeat brand of comedy, Nye enthusiastically demonstrated science experiments while explaining their impact to his viewers. After graduating in 1977 with a bachelor’s degree in mechanical engineering from Cornell University, Nye went to work in the Seattle area as an aeronautics engineer for Boeing before transitioning into a broadcasting and entertainment career.

Today, Nye contributes to a variety of news programs as an all-purpose science expert and he also serves as director of the Planetary Society, the world’s largest non-governmental space interest organization.

“Many of our graduates were first introduced to the wonders of science by watching Bill Nye on television, and he remains a source of inspiration for a new generation of innovators,” says RIT President Bill Destler. “He is a transformational force within American society and we are very honored to welcome him back to RIT.”

In addition to Nye’s address, Destler will confer degrees on more than 3,500 RIT undergraduate and graduate students during Academic Convocation. The event serves as the kickoff to the university’s two-day commencement celebration.

RIT In the News:
The Huffington Post — April 4, 2012
The best prospective commencement speakers in 2012