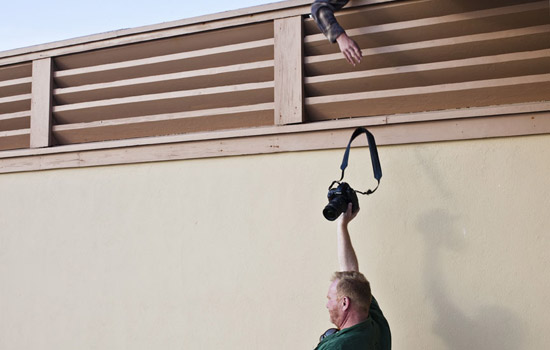 Jenny Magruder, a fourth-year fine arts photography student at Rochester Institute of Technology, has been chosen as a finalist in this year’s Sony World Photograph Awards Student Focus.

Magruder’s image, Linger, ten, was selected to represent North America in the world conference in April in London.

“Her accomplishment has boosted her into the public eye of the photographic community,” says Therese Mulligan, administrative chair of RIT’s School for Photographic Arts and Sciences. “Her work is powerful and this just validates that.”

Magruder, of Magnolia, Texas, is one of 10 photographers participating in the final competition. The winner will be announced at the Sony World Photography Awards ceremony on April 26 at London’s Park Lane Hilton Hotel.

“It can be the slightest angle shift, or a huge, startling difference in approach, but it is no easy feat to make a photograph that is distinctive in today’s onslaught of images,” says Virginia Morrison, a judge in the competition. “The finalists that I had the pleasure of reviewing succeeded in making their fleeting moments stand out in a crowd with such an array of interpretations of the theme. I was struck by the diversity of moments, so to speak, and the range of sensibilities.”

This year’s student competition was based on the philosophy of the haiku poem. The photographers were asked to take on a role similar to that of a haiku poet and create an image that depicts what the organization called a fleeting moment or decisive moment.

Student Focus has established itself as the world’s most high-profile student photography award and is open to universities worldwide that run a photography program. The 2012 competition has attracted entries from more than 200 institutions across six continents, having grown from just 10 European universities in 2007, its inaugural year.

As part of being chosen as finalists, all photographers will participate in World Photo London at Somerset House in London in April. The students will participate in lectures, talks and master classes led by industry figures and Academy members and their images will be exhibited.