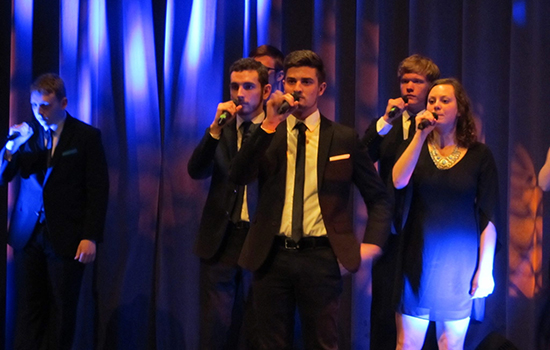 Kevin Wiesinger, a third-year management information systems student, is a member of the RIT a cappella group Proof of Purchase (POP).

Kevin Wiesinger, a third-year management information systems student, is a member of the RIT a cappella group Proof of Purchase (POP). Weisinger, from Wilson, N.Y., is going into his second year of a cappella at RIT and is currently serving on his group’s e-board. Prior to his POP debut, Wiesinger was a two-time director of his high school chorus and held major roles in several of his school’s musicals.

Question: What brought you to RIT?
Answer: I came to RIT for a variety of reasons. I have family members who attended RIT and had always heard great things from them. I was looking for a larger school, with good connections to industry, but one that wasn’t too far from my home in Wilson. I applied to several schools, but of the ones I was accepted to, RIT had the best combination of academic rigor, extracurricular opportunities, and generous financial aid.

Q: Are the a cappella groups co-ed?
A: Some of the groups are! My group, Proof of Purchase, is a co-ed group. However, there are gender specific groups on campus, including Brick City Singers (male) and Vocal Accent (female).

Q: How do you find the balance between school, work and a cappella?
A: I have a pretty rigid schedule, and I stick to it. I work about 25 hours a week, as well as taking classes and having close to 10 hours of practice for a cappella. I find the balance by making sure that I have time to get my schoolwork done, and then build everything else around that. I’ve found that I have actually done better in school since joining a cappella, because it has given me a creative outlet to do something I really love. That makes all of the time spent studying and working much less of a burden.

Q: What is your favorite song to perform with your group and why?
A: I really love to perform “Bright Lights.” It is one of my solos, and it is also POP’s alumni song. Whenever we perform it at a large concert, anyone who was previously a member of the group can come on stage and perform with us again. It really makes me feel like a part of something bigger. I love seeing the alumni really get into the song.

Q: Do you plan to continue singing beyond your time at RIT?
A: I hope to continue singing in some capacity after I graduate from RIT. I have always loved theater, and I’m sure there will be some sort of community theater I could participate in wherever I end up after graduation. Music, and singing in particular, is a huge part of my life, and I don’t expect to ever stop in earnest.