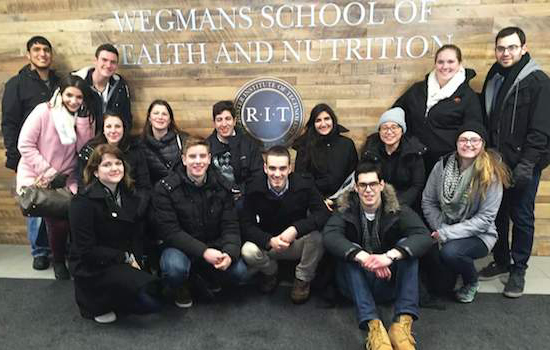 Engaging students, supporting sports teams and finding ways to manage a budget were discussed among student leaders from Rochester Institute of Technology’s four international campuses in Kosovo, Croatia and Dubai this week during the annual Student Government Consortium.

Several students attended with their vice presidents and other student leaders. The group, totaling 14 international students and six from Rochester, toured campus, watched presentations from staff about programs and services offered and had dialogues and discussions about common issues they deal with as leaders.

“We discussed our similarities and differences of college life and how we run student organizations,” said Giordano, a political science and management information systems major. He’d like to adopt a custom from an international campus that invites former Student Government presidents back to talk with administrators from the perspective as alumni.

And the international students hoped more RIT students would participate in student exchange programs to be more familiar with their students, countries and cultures.

“I don’t know if students know about all the things they can do in Dubai,” said Waqar, who is majoring in computing security.

Selmani, who has a duel major in economics and statistics as well as management, agreed.

“Even though Kosovo is a new country, there are a lot of things to learn there,” she said. “It is an interesting place to visit.”

The visiting students were impressed by the size of RIT’s campus in Rochester.

“Everything on campus is so big. It’s like a small city,” Selmani said. “You have everything.”

The students started their visit with a trip to Niagara Falls. They also checked out Wegmans, Dinosaur Bar-B-Que and Eastview Mall.

Tabula, an international business major, chose to attend RIT Croatia, in part, because of RIT’s good reputation and what appears to be a closer relationship between students and professors. “The majority of students are successful,” he said.

The say the students on their international campuses are proud to be part of RIT and help make it a global university. They read RIT’s News & Events, and Ritchie, the RIT mascot, makes appearances on their campuses.

“What we will remember is how we came together from different countries and learned how to deal with different things,” Selmani said. “We learn a lot from each other. I will remember this as a lifelong experience.”

“We have a large tiger family,” Waqar said.