Student learns to control computer with a blink of an eye 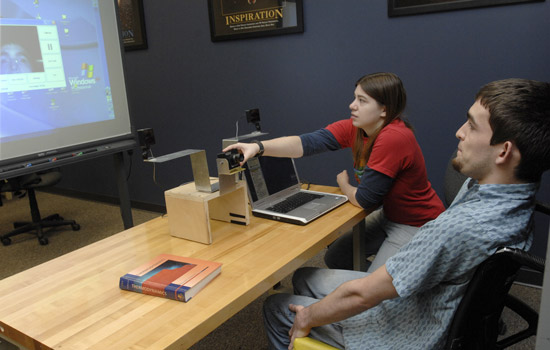 Devin Hamilton, a third-year mechanical engineering technology student was recently featured in the online version of The Wall Street Journal about his unique use of Quick Glance. He and classmate Beth Keifer work together on several class projects.

Imagine being unable to type commands on a computer or text message to peers? What if there was a technology that can help you do both—and more—with just a blink of an eye?

For RIT student Devin Hamilton, a blink is all he¬ needs to use an advanced eye-tracking technology called Quick Glance. Hamilton uses the hands-free computer control using eye movements. This allows him to effectively manage the keyboard for his coursework and communication. The third year mechanical engineering technology student was recently featured in the online version of The Wall Street Journal about his unique use of Quick Glance.

On Jan. 15, Andy Jordan, producer of Tech Diary, the video news magazine for The Wall Street Journal, visited campus and filmed Devin using the Quick Glance technology set up—a camera mounted to a computer, viewing screen and several infrared lights. Jordan followed him on a typical day in his dorm room, in class and in the machine lab working on class projects.

The two met through the Quick Glance parent company, Eye Tech Digital Systems. The company keeps in contact with one of its most prolific users and they in turn introduced Devin to Jordan to share his story.

“I’ve been using Quick Glance for three years,” says Hamilton, a native of Delhi, N. Y., a small town near Oneonta. “I got this halfway through my first year at RIT.” Prior to using the eye tracking device, he used a mouth apparatus and, as seen in the video, a one-button mouse. “But, as you can imagine, it was very slow to use, which didn’t leave much time for getting my hands dirty in product development,” he says.

Hamilton has seen the technology change over time; often Eye Tech Digital Systems will contact him about upgrades to the software or equipment. He also has been instrumental in sharing improvements to the equipment with the company.

“The Mechanical Engineering Technology program and especially open access to the machine tool lab have given Devin the chance to do what he loves,” says Elizabeth Kiefer, a third-year mechanical engineering technology student and friend of Hamilton’s. Kiefer and Hamilton worked together this summer at Northeast Fabricators LLC, an engineering company in the Catskills. This past year, Hamilton began development of his own company, Creative Adaptive Tools, to enable disabled individuals to complete everyday tasks they could not do otherwise, he says.

“Since Devin has been in our major, he has been able to take the knowledge he has learned and been able to apply it to his own life,” says Stephanie Soroka, academic advisor in the manufacturing and mechanical engineering technology program. “ I have seen many improvements in Devin since he was a freshman. The new technologies he is using allow him to complete our program, which is very hands-on. I think he has also found something that he is really good at and enjoys.”

The video story can be found at: http://bit.ly/10oiSj