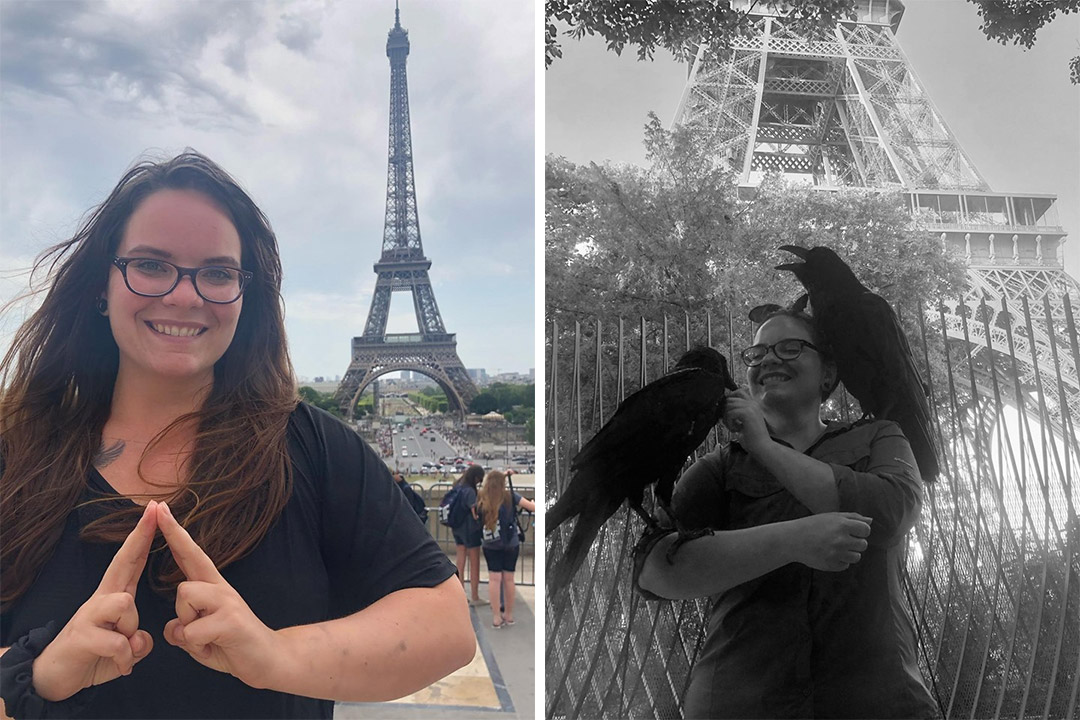 At left, Grace Bradford stands in front of the Eifel Tower, holding up the ASL sign for Paris, France. At right, Bradford had the unique opportunity to take photos with her favorite animal, ravens.

Looking to learn more about the roots of American deaf culture, fourth-year student Grace Bradford went on a study abroad trip to France. From June 24 to July 4, the ASL/English interpretation and School of Individualized Study (SOIS) double major traveled with other NTID students to Paris, Reims, La Balme-les-Grottes and Lyon.

During the trip and the accompanying spring semester course, Bradford and her peers learned more about French deaf studies, deaf communities and culture. Additionally, they learned Langue des Signes Française (LSF) so the students could communicate with their French peers in their native sign language during the trip.

Bradford’s SOIS concentrations are in history, museum studies and environmental sustainability, and she hopes to apply her skills as an interpreter in a national park or museum setting. Outside of her studies, Bradford is involved with Hands of Fire (a deaf chapter of RIT CRU), the RITPagan club, the Outing club and SVP (freshman orientation for NTID students). She also works part time for REI, and works with RIT Catering and RIT’s Department of Access Services as an interpreter and notetaker.

Question: Why are you interested in pursuing a career in ASL interpretation?

Answer: This is a question that deaf people will often ask interpreting students and I can never give an eloquent answer. I have nothing better to say, than it’s a calling. I graduated from high school in East Tennessee and later moved to Indiana, and in both places I had exposure to the deaf community. Through those experiences, I just fell in love with the culture and the language, and I just knew that was what I wanted to do. Since I was 12 years old, I knew I wanted to be a combat medic in the U.S. Army and that I wanted to be an interpreter, and here I am doing both. I got out of the Army in 2014, so the events didn’t quite happen in the sequence I wanted it to, but I am still fulfilling my dreams.

Why were you interested in going on this particular NTID study abroad experience?

A little-known fact about American deaf culture is that it actually has its roots in France. Thomas Gallaudet worked closely with a man named Laurent Clerc when he went over to France. Clerc came back with Gallaudet to the U.S. and helped him set up the first deaf school. So, a lot of our linguistic features, at least in the beginning stages, had strong echoes of French Sign Language (LSF). This trip was a great opportunity to see where American deaf culture and its roots come from. We had the opportunity to get a tour of the first deaf school in the world, we saw the boyhood home of Laurent Clerc, and a lot of other sites that are incredibly historically significant to deaf culture. With my background in history, I was really nerding out.

Tell us about the class that you took that accompanied your study abroad.

We briefly discussed major tipping points in French history, such as the Revolution, as well as some prominent French deaf figures. We also took time to learn LSF before going on the trip. While there are minor similarities, LSF and ASL are two completely different languages, so it wasn’t necessarily easy to pick up the second language. I would equate it to learning Spanish as an English speaker. Once you’re over there for a couple weeks, you start getting the hang of it and you can have basic conversations. I’m definitely not fluent, but now I know basic phrases to communicate with when I go back.

What was your favorite part about this study abroad experience?

Academically, I think, because I have a linguistic nerdy mind, my favorite part was learning LSF. We didn’t have the time to get too deep into it, but I really cherish learning other languages. If it were possible, I would learn them all. Anytime I travel I just have so much fun learning different phrases and communicating with the locals.

What are your plans for after graduation?

I’m not entirely sure, life always has its curve balls. I reckon I’ll probably stay here for a few years and get some interpreting experience under my belt because this is such an amazing place to be for that. Then, when I am ready, I would like to do an internship at Yosemite National Park and get my ranger certification. I’m really interested in making national parks more accessible for everyone, and right now access services are lacking for those who are deaf and hard of hearing. So, hopefully after Yosemite, I’ll move on and be able to set up full-time access services within the National Park Service.