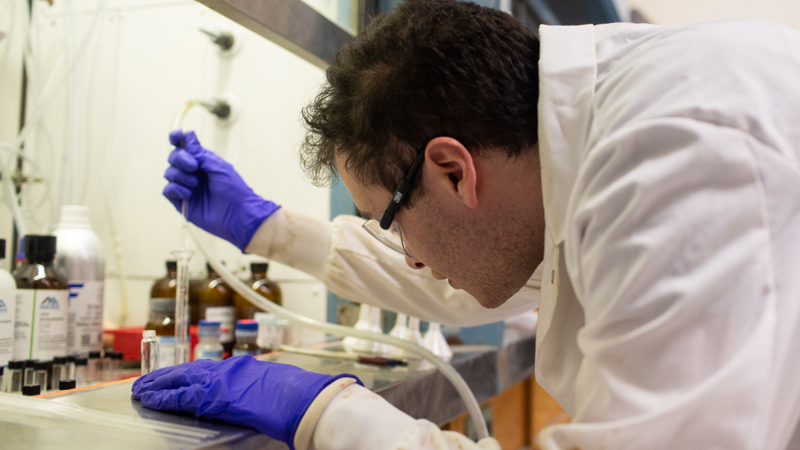 Noah Gubernick is a fifth-year BS/MS chemistry major at RIT and his mentor/advisor is Dr. Michael Coleman.

My research focuses on the chiral resolution of cyclopropyl esters, in order to use them to synthesize a chirally-active N-Heterocyclic Carbene (NHC) ligand.

NHC-based organometallic catalysts have been used in a wide variety of reactions, and research has only recently begun to expand into the realm of *chiral* NHC catalysts for enantioselective synthesis. Ordinarily, this type of synthesis could only be catalyzed by expensive and potentially toxic Rhodium-based catalysts, but NHC has shown plenty of success in the past few years doing the same reactions with only copper.

The Coleman group has focused on synthesizing its own chiral NHC species for testing, which includes a cyclopropyl moiety for increased structural stability. The plan is to make the NHC from the corresponding cyclopropyl ester, via conversion to the amine and then conjoinment of two amines to the imidazolium salt. The ester synthesis we currently employ provides a racemic product, however, so this is where my focus on chiral resolution comes in.

My studies over the last few months have been using crystallization techniques to separate the two cyclopropyl ester enantiomers. When I convert the ester to its carboxylic acid, it is able to form a salt with an amine base. When the amine base is chirally pure, the resulting salts will be diastereomers and potentially crystallize at different times/conditions. I am currently still screening various amine and solvent combinations that provide enantio-enriched crystals, analyzing them by running the filtered solid on a chiral HPLC.

How did you come to study Chemistry at RIT?

I came to study chemistry at RIT via the Science Exploration program at COS. Led at the time by Dr. Roger Dube, I got to participate in a fascinating experiment that explored the potential formation of amino acids on ancient Mars, using a modified Miller-Urey experiment. The experiment covered multiple disciplines, but the chemistry and experimental design drew me in the most. That, plus my enjoyment in my early Organic Chemistry classes, led me to major in chemistry.

How did you become interested in this particular area of research?

I became interested in Dr. Coleman's organometallic research after a bout of indecision between organic and inorganic chemistry. I enjoyed both very much in classes, but was disheartened that I likely only had to pick one to research. But lo-and-behold, the two disciplines cross over in very interesting ways, and Dr. Coleman was spearheading a project that covered that very field. Since then, I've learned much more about organometallics and catalytic complexes, and my passion for it hasn't diminished a bit.