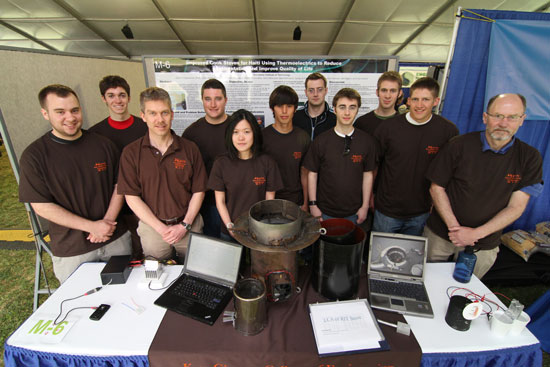 Paul Polak of the International Development Enterprise organization stated that the majority of the world’s designers focus their efforts on developing products and services for the richest 10 percent of the world’s customers. The remaining 90 percent need many of the same services, yet have the least amount of resources to acquire or develop them.

Students from Rochester Institute of Technology participated in a national design competition that could help to turn the balance. They were awarded honorable mention for their cook stove project that has the potential to provide a beneficial resource for Haiti, especially as it recovers from the January earthquake.

RIT was one of 42 collegiate teams entered in the National Sustainable Design Expo that took place April 23-26 in Washington, D. C. The expo was sponsored by the Environmental Protection Agency as part of its People, Prosperity and the Planet Awards Program.

“Being honored for our design of an innovative stove at the expo was thrilling. We just hope the project can continue because there is such a great need for improved stoves,” says Gam Chaijaroonrat, a fifth-year mechanical engineering student and leader of the stove-testing team.

“The students did a great job showing off their work to the public,” says Robert Stevens, assistant professor in the RIT mechanical engineering department, who supervised the student research. Stevens had also been lead researcher on a previous engineering project to improve LED lighting in developing countries. “Lighting is big, but cook stoves—this is even bigger,” he says.

Meeting the design and sustainability challenge

A multidisciplinary team of undergraduate students in the Kate Gleason College of Engineering at RIT developed a stove that uses natural resources efficiently utilizing thermo-electrics and a simple blower. The student team focused on use of the stove in Haiti, one of the poorest countries in the western hemisphere, according to the World Health Organization.

Use of a cook stove is the primary means of preparing meals by nearly half of the world’s population. Without electricity or other alternative energy sources, individuals use wood from local forests or other biomaterials at increased rates, triggering the domino effect of deforestation, erosion and changes to natural ecosystems. In Haiti, only about 4 percent of the original forest on the island remains, a considerable decrease on an island that was once a tropical forest, Stevens explains.

“We decided to use a combustion process known as updraft gasification in our stove’s design. We also optimized fluid flow in our stove. This greatly reduces fuel consumption and emissions compared to the current stoves being used,” says Kevin Molocznik, a fifth-year mechanical engineering student.

“With the use of thermo-electrics, the stove will be able to run a small blower while also charging small electrical devices such as cell phones or LED lights, a huge benefit for areas where there is no electrical power available,” adds Luke Poandl, also a fifth-year electrical engineering student.

In addition to designing the cook stove, the team is planning to develop a business model toward the manufacture and maintenance of the stoves.

“Because most Haitians are living on less than $2 per day, developing an affordable stove is critical and challenging. Our current design uses recycled steel drums, readily available. The skill set for processing drums already exists, which enables us to keep the stove cost below $10 and provide the opportunity for local manufacturing,” says Chris Brol, another of the mechanical engineering students on the team.

Making use of local community connections

“They worked thoughtfully and gathered information about the cultural and economic aspects of food preparation in rural Haiti, the ecological problems caused by charcoal production and also the health issues that are caused by the use of charcoal,” says Rose-Marie Chierici, executive director of H.O.P.E. “I believe that the cook stove they designed stands a very good chance of being accepted. It is safer and more economic, and at the same time will not disrupt the way people like to prepare their food. I am sure that it will be well received.”

Stevens says the team is going to try to continue developing the stove and seek other funding opportunities.

“Our engineers have been excited to work on a problem that is so critical for nearly half the people in this world. The students are thinking about issues,” he says.