Many volunteer on campus, in their communities or around the world 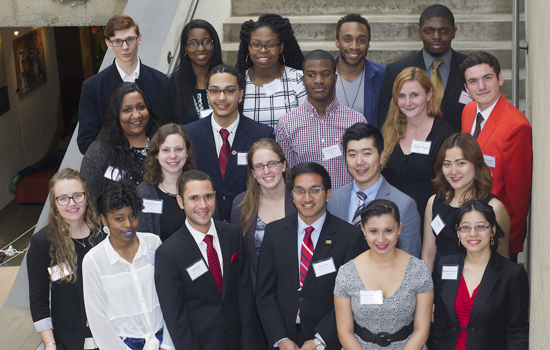 Some of the RIT students recognized during the 2016 RIT Leadership Awards.

The awards are given to nominated students who possess high leadership qualities, help advance college life on campus or in the community, help to build bridges for their peers and, in some cases, overcome personal hardships.

“All of us in Student Affairs are proud of the outstanding work and accomplishments of the recipients this year,” said Kerry Foxx, director of the Leadership Institute & Community Service Center. “Each of them are uniquely deserving of recognition.”

Nicholas Giordano, RIT Student Government president and one of the award winners, said many of the recipients have served in influential roles as experienced leaders in various organizations.

“The accomplishments you all have had here at RIT define a commitment to your organizations and a passion to succeed, and it is those like you that make your clubs and organizations continually better,” he said.

Giordano stressed that the best leaders are the ones who foster the growth and development of future leaders once they have graduated.

“Without a focus on helping those who will lead after us, the work we have done will have been for naught,” he said.