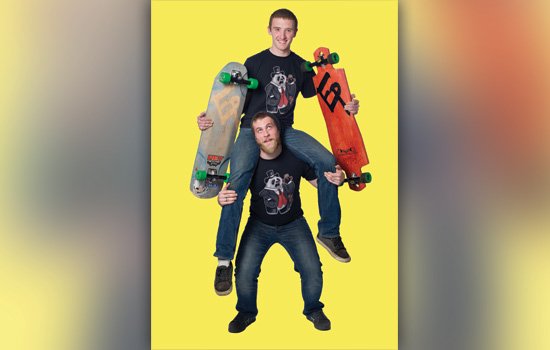 Tyler Schrodt wanted to build and sell longboards but had one problem—he didn’t know how to make them. Evan McCool knew how to make longboards, but he didn’t have the business experience to sell them.

Schrodt and McCool joined forces to start their own longboarding company using money from their savings accounts. They founded Enraged Panda Boarding Co. in 2010.

Today, Enraged Panda sells 10 to 30 longboards every month to enthusiasts all over the world, including customers in New Zealand, Germany, Canada and South Africa, and an additional 20 to 30 longboards to skate shops nationwide.

The two run the business while attending RIT full time.

Schrodt ’13 (international business and finance) is pursuing his MBA. The Alden, N.Y., native had his first longboarding encounter during his freshman orientation week at RIT, when a new acquaintance asked him to give longboarding a try.

McCool, who will graduate in May with a bachelor’s degree in mechanical engineering technology, had been skateboarding since he was 7 years old. When he came to RIT from Binghamton, N.Y., he quickly realized that his skateboard didn’t work as well when going over the bricks and bumps on campus. He decided he needed something with bigger wheels and, like Schrodt, picked up his first longboard during orientation week.

They were introduced through a mutual friend and within two weeks knew they wanted to start a business. They first set up shop in McCool’s dad’s garage in Henrietta, N.Y., and began selling longboards to the RIT and greater Rochester communities.

Enraged Panda was growing in popularity in the area, but it wasn’t until they got in touch with California-based company RipTide Sports that their business really started to take off.

“For the first six months I don’t think we sold a board out of Rochester,” McCool said. “Without the RIT skate scene, we wouldn’t have gone anywhere.”

RipTide connected them with wholesale parts distributors and skate shops. According to Schrodt, RipTide took a chance on them and that endorsement helped Enraged Panda to have a lot of organic growth.

“I think perhaps we validated their ideas for them,” said Tracey Miller of RipTide Sports. “We took them seriously, let them know what we thought of their ideas and from that they found the confidence to move forward.”

Enraged Panda goes above and beyond to make the perfect longboard for every customer, something that’s harder for larger companies to do. They can modify the specifications of a board based on the rider’s size or riding style. The two hand-make each board.

“We really push the handmade aspect of it because we touch every board that we sell,” Schrodt said. “It’s part of what sets us apart as a company.”

They don’t stop there; the artwork featured on the bottom of the longboard can be customized as well.

Schrodt and McCool contract RIT art students to paint what are sometimes masterpieces on the bottom of their longboards. Often the request is for some form of video game artwork or unique color combination, but it can get much more detailed than that.

Artist Emily Gage, a fourth-year illustration student from Shortsville, N.Y., has been painting Enraged Panda longboards since 2011. She has painted about 20 boards, with the graphics ranging from the re-creation of a model in a longboarding advertisement to “My Little Pony.”

“The harder decks to paint are definitely the ones where I have to get a likeness to another image,” Gage said. “It is a fun challenge though.”

When they aren’t building new Enraged Panda boards, Schrodt and McCool stay busy. In addition to running Enraged Panda, Schrodt is working two jobs and running a software development start-up company. McCool balances the company with his academics and a full-time engineering position.

Schrodt and McCool hope to expand Enraged Panda by working with one of the largest longboard distributors in Canada. As the business grows, the duo still plans to keep it as a part-time project. They recently hired an intern who they hope will be able to take over much of the production.

“We’re really proud of where it has come to be,” Schrodt said. “We’re ecstatic that it has grown over the past few years and hope to continue that.”