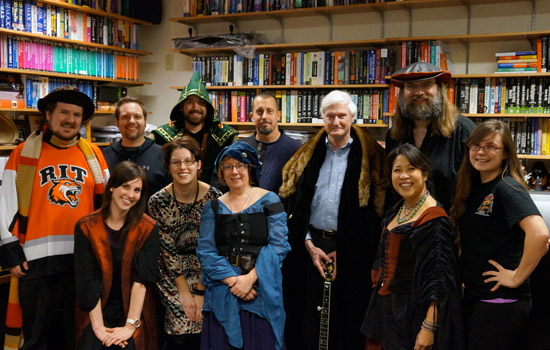 Faculty helped students explored the campus and prepared for winter in a Game of Thrones themed scavenger hunt Dec. 19, as part of a Just Press Play achievement.

Brace yourselves; winter is coming to RIT.

Donning “House RIT” robes and wielding his trusty banjo, RIT President Bill Destler filled in as the “King of Games” for Run the Gauntlet: Winter is Coming, a Game of Thrones-themed campus-wide scavenger hunt on Dec. 19. By completing the gauntlet, students gained an achievement for Just Press Play, the Microsoft-supported project that aims to increase student engagement and exploration through the application of game elements over the student experience. The achievement system is currently available to students in the School of Interactive Games and Media.

The hunt sent 46 students across RIT’s campus and back to Golisano Hall, providing them with tips for getting through a Rochester winter along the way. Riddles included, “You will find safe underground passage here to the House of Liberal Arts,” (tunnels to Liberal Arts Hall), “Here lies the home of the Tigers,” (Ritter Arena) and “Diggin’ the scene with books and beans,” (Java Wally’s).

“The scavenger hunt was a great way for students to explore parts of the campus they may not have seen before,” says Elouise Oyzon, associate professor in RIT’s School of Interactive Games and Media and design lead of Just Press Play. “Plus, we knew that most students would appreciate the ‘winter is coming’ theme.”

After each team made it past several checkpoints, they were met with the final clue: “Where is the Throne of Games?” Students immediately knew to make their way to the School of Interactive Games and Media office, and were pleasantly surprised to find Destler and professor Andy Phelps recreating the popular “Winter is Coming” meme.

“The Game of Thrones meme is clever,” Destler says. “But my favorite has to be the one where I’m standing on the Eastman building, dressed as Saruman from Lord of the Rings, yelling ‘Bring it, Sandy!’ ” 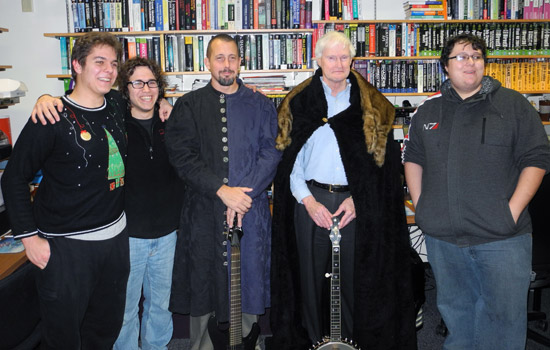 Students explored the campus and prepared for winter in a Game of Thrones themed scavenger hunt Dec. 19, as part of a Just Press Play achievement. 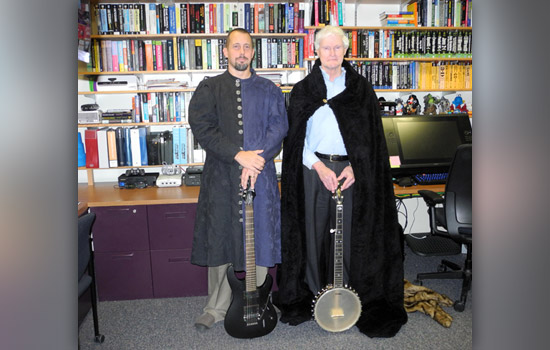 RIT President Bill Destler helped out in the Game of Thrones-themed scavenger, recreating his look from the popular “Winter is Coming” meme. Here he stands with professor Andy Phelps.
Search RIT