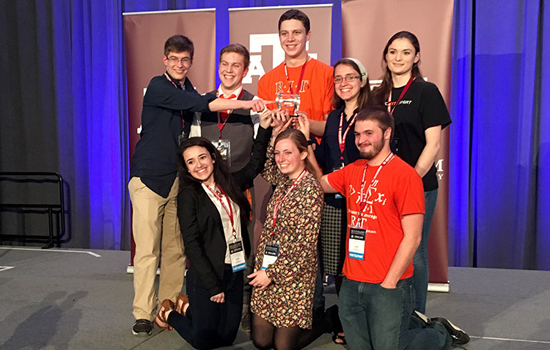 Elon Musk first proposed the Hyperloop idea in 2013, and his company, SpaceX, is one of several seeking to accelerate the development of a system prototype. Musk proposed a national challenge—to build a scaled-down pod model and necessary Hyperloop sub-systems.

Two undergraduate teams from RIT participated in the design weekend. They were among 115 U.S. and international universities vying for the opportunity to contribute to the Hyperloop concept, a multi-passenger pod or capsules speeding through a series of depressurized tubes.

Their designs include a high-speed communications system and a sensor system to detect faults in the walls of the tube that could impede the motion of the pod. Both are relatively new technologies applied to a higher speed environment.

“It is an entirely imaging-based method,” said Kristina Carucci, a second-year motion picture sciences major. “Other traditional methods that are used to scan tubes, like oil pipelines, would not work in this case. Scanning the walls of the tube will use what is called ‘structured light,’ and it is commonly used to make 3D maps of stationary objects for scientific purposes. But it has never been used at such high speeds.”