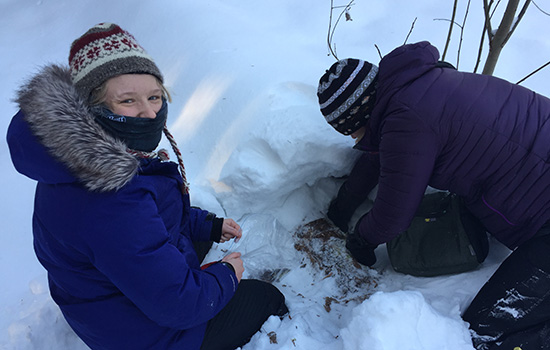 Biology student Hailey Richmond-Boudewyns, left, looks at mosses that survive under the snow in Russia with Celia Evans, a professor of ecology at Paul Smith's College, during a study abroad trip in January 2017.

Criminal justice and public policy double major Tayler Ruggero was working as a research assistant doing crime analysis when she saw posters for a faculty-led study-abroad trip to Rwanda where she could use mapping technology to help refugees.

“I was interested in learning GIS (geographic information systems) for my criminal justice research position and I always wanted to study abroad, so I thought why not go to Rwanda for it.”

Ruggero and eight other students spent the intersession of January 2016 at the Kigeme refugee camp working with the United Nations High Commissioner for Refugees (UNHCR) Agency collecting data on everything from bathrooms to businesses run by the refugees. They then spent the following spring semester mapping the data in a follow-up class taught by Brian Tomaszewski, an associate professor and director of RIT’s Center for Geographic Information Science and Technology.

Ruggero liked the experience so much that not only did she decide to minor in GIS, but she applied for a second international experience. She spent last summer in Bonn, Germany, as a fully-funded research scientist working on Tomaszewski’s National Science Foundation research project.

Study abroad at RIT has been undergoing a quiet transformation in the past five years with the growth of short-term international programs, an increase in faculty-led opportunities and a stronger connection to RIT’s global campuses.

More than 400 students studied abroad in 2016-2017, a record number for the university and up from 232 in 2009-2010. That number is expected to increase in coming years. RIT President David Munson has said he wants the university to create more international opportunities for students so they are more globally connected.

“Studying abroad is a life-changing experience,” said Jenny Sullivan, director of Education Abroad and International Fellowships. “The personal growth and skills the students get—flexibility, problem solving, the ability to think on their feet and see things from new perspectives—are all benefits for every person in every major. Students are waking up to the fact that the world is so much bigger than their tiny bubble.”

Ten years ago, a few faculty members were leading trips abroad like Tomaszewski’s Rwanda trip, but not many, Sullivan said. Most students studying abroad were going through third-party providers to either a study center overseas that was accredited by an American university or by directly enrolling in another university’s program.

But during the last decade, busy students have become more interested in short-term programs that can last just a few weeks and can be done during breaks or over the summer. This increased interest, which is happening nationally too, has opened the door for RIT’s faculty to customize international experiences, Sullivan said.

A faculty member teaches a course in the fall or spring and the travel component happens over winter break or at the beginning of the summer or vice versa as was the case in Rwanda. Students pay tuition for the course along with the flight and program fee. Scholarships are available.

This semester, six students are meeting once a week in Christy Tyler’s aquatic ecology course to talk about marine and freshwater ecosystems as well as the language and culture in Russia. Then in late May, they will spend three weeks working alongside students and faculty from Moscow State University on coursework and field research focusing on the regional aquatic ecosystems. They will work at the Zvenigorod Biological Station in central Russia and the White Sea Biological Station in the Russian arctic.

“Moscow State is one of the largest research universities in the world, so it’s an opportunity for our students to interact with scientists from this world-class institution and be able to experience science in a whole different environment,” said Tyler, an associate professor of environmental science. “Having them experience arctic ecosystems is something really unusual that not very many people have the opportunity to do.”

This is the second time RIT students will be making the trip. Five undergraduates took the class in the fall of 2016 with Carrie McCalley, assistant professor of environmental science, and traveled to Russia in January 2017 with students from Paul Smith’s College.

Celia Evans, a professor of ecology at Paul Smith’s College, reached out to RIT because she was looking for a larger university partner. Tyler and McCalley were intrigued at building both a research and teaching collaboration with Moscow State. The two, along with Matt Hoffman, director of RIT’s applied and computational mathematics MS program, visited Russia in summer 2016 and McCalley began teaching the RIT class a few weeks later in the fall semester.

McCalley said while in Russia students were split into four groups—freshwater aquatics, plants, insects and mammals— and spent most of their time in the field with an expert. They collected samples, studied animal tracks and talked about why different organisms were found in different places.

“The Russian curriculum is much more focused on basic science than we do in the U.S.,” McCalley said. “It was a very different learning environment for some of our students—to just go out in the field with an expert and have someone show you everything.”

McCalley said the experience not only gives students access to faculty expertise that RIT doesn’t have, but it allows them to have interactions with Russian graduate students and faculty.

“One thing I saw a lot was this realization that Russian people are just people and they are just like us,” she said.

Along with an increase in faculty-led programs, RIT has begun working more closely with its global campuses in Dubai, Croatia and Kosovo.

Sullivan said last year they had the idea to have students complete a full immersion abroad in one term. An immersion is a concentration of three courses and is required for every student.

RIT Global did some research and found that psychology is the top immersion. Then they worked with RIT Croatia, which offers psychology, to build a summer study abroad experience.

Students go to Zagreb, Croatia, for five weeks and take two courses in psychology and then spend the sixth week on a study tour visiting Vienna, Austria, and Munich, Germany, and exploring places such as the birthplace of Sigmund Freud.

After the students return, they have the option to complete the immersion by taking an online course during the summer.

Hoffman, a third-year human-centered computing student, always wanted to study abroad and she had already taken one psychology course. “It appealed to me to get the rest of immersion out of the way,” she said.

She really enjoyed having classes with students from Zagreb and said she learned about herself in the process.

“I definitely became more independent,” she said. “It is hard going to a country where you don’t know the language.”

Kupferschmid liked the program so much that she decided to change her major from ASL/English interpretation to psychology. She said the abnormal psychology class was especially interesting from a Croatian teacher’s perspective.

Also, the length of the trip was perfect for Kupferschmid. “It was a lot of fun,” she said. “I recommend it for sure.”

RIT Global offers more than 600 programs in 60 different countries, Sullivan said. This includes affiliate programs offered through other universities and third-party providers as well as the growing number of RIT options.

A few years ago, Jeremy Haefner, provost and senior vice president for Academic Affairs, mandated that every major identify study-abroad pathways in the curriculum, and today there’s a program that can work for every student interested.

“That really has allowed us to get through that myth that I’m a so-and-so major so I can’t study abroad,” Sullivan said. “Every student has an opportunity for a full semester.”

And there are programs, such as Tomaszewski’s NSF International Research Experience for Students (IRES) in Germany, that cover student expenses.

Tomaszewski said they are in the second year of the three-year $250,000 NSF IRES grant. The students spend 10 weeks in Germany working directly with the United Nations University Institute for Environment and Human Security and the University of Bonn.

Ruggero, who was part of the first cohort of five, said she was a visiting scientist at the United Nations studying how maps are used during disasters and an area’s ability to respond when a disaster strikes.

She and the other students spent most of their time doing a literature review, which they are working on publishing, as well as meeting with disaster management stakeholders in Europe.

The cohort going this summer, which includes three Ph.D. students from the Golisano Institute for Sustainability, will work on creating an index that can rank an area’s geographic capacity for disaster resilience.

“This is different than study abroad. This is doing basic scientific research,” Tomaszewski said. “They are reviewing disaster case studies, coming up with variables for a model. They will build the model, test it, do interviews with disaster practitioners in Germany and tap into expertise with the United Nations.”

Tomaszewski said he studied archeology abroad in Mexico when he was 19 years old through an NSF grant. In an effort to give students the same experience, he applied for this NSF grant four times over five years before it was awarded.

Ruggero is glad he was persistent. She had never left the United States before that January in Rwanda. During her 10 weeks in Germany, she was able to visit seven countries on the weekends and expand her international professional network.

She also got to work on her own research project, which she will be presenting at the American Association of Geographers conference in April in New Orleans. In her research project, she compared the Federal Emergency Management Agency in the U.S. to the Federal Office of Civil Protection and Disaster Assistance in Germany.

That experience will set her up well for what’s next after she graduates in May.

“A lot of your learning now is outside of the classroom,” Ruggero said. “Building on these experiences will help me in the workforce, especially people skills. That’s something I appreciate— to have that experience abroad twice.”

In general, travel abroad is no riskier than the daily routines people participate in at home, said Jenny Sullivan, director of Education Abroad and International Fellowships. That said, RIT works very hard to ensure the safety and security of its study abroad programs. “Between thoroughly vetting overseas sites and partners, faculty training, a rigorous pre-departure program for students, RIT’s robust 24/7 inter–national emergency response plan and in-country partners who provide on-site orientations and support, we are doing everything we can to ensure students are able to focus on their cultural learning,” Sullivan said. “Indeed, the one thing that can make us all safer, wherever we are, is greater cross-cultural understanding.”

RIT students and their families will explore RIT’s campus in Dubrovnik, Croatia, this May. Jim Myers, associate provost for International Education and Global Programs, will be leading educational excursions for six students and eight parents. “I would love for this to become an annual opportunity for our families,” said Chelsea Petree, director of Parent and Family Programs, adding that applications for this trip are closed. “I have seen from campus partners and parents an interest in this opportunity, and I will work to continue it in the future.”

Alumni also have an opportunity to study abroad with RIT faculty members. In 2014, 23 alumni traveled to Cuba for an eight-day trip with Denis Defibaugh, a professor of photographic arts and sciences, and retired National Technical Institute for the Deaf Professor Dawn Tower DuBois. This July, 12 alumni will go to the Galapagos for 12 days with Bob Rothman, a professor in RIT’s Thomas H. Gosnell School of Life Sciences. The Galapagos trip is sold out. But more trips are being planned, including a trip to Iceland in March 2019 with Josh Owen, professor and chair of the industrial design program. For more information, go to bit.ly/RITAlumniTrips. 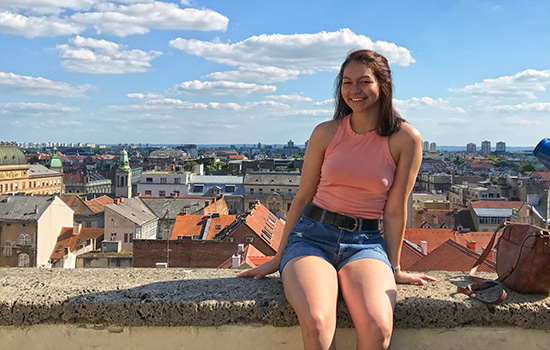 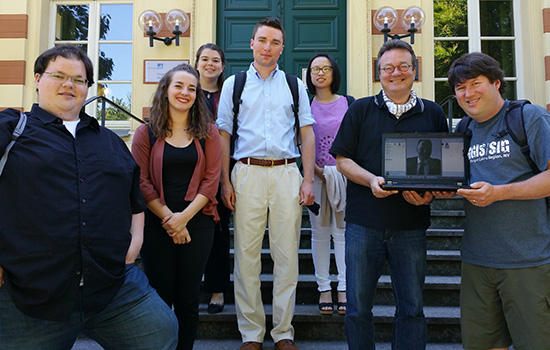