Study evaluates the manufacture, material use and performance of solar cell technology 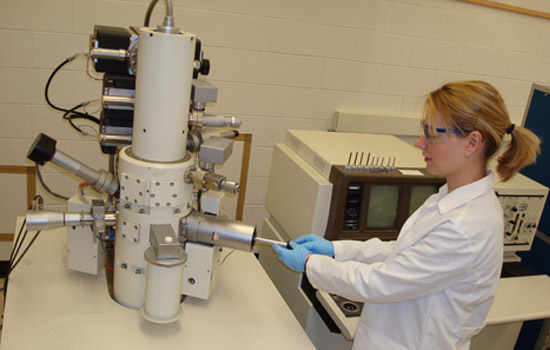 Annick Anctil, a fourth-year doctoral student in sustainability, conducts experiments on different varieties of solar cells in RIT's NanoPower Research Labs. Through a grant from the U.S. Department of Energy, Anctil conducted one of the first life-cycle assessments of organic solar cells.

Solar energy could be a central alternative to petroleum-based energy production. However, current solar-cell technology often does not produce the same energy yield and is more expensive to mass-produce. In addition, information on the total effect of solar energy production on the environment is incomplete, experts say.

To better understand the energy and environmental benefits and detriments of solar power, a research team from Rochester Institute of Technology has conducted one of the first life-cycle assessments of organic solar cells. The study found that the embodied energy — or the total energy required to make a product — is less for organic solar cells compared with conventional inorganic devices.

“This analysis provides a comprehensive assessment of how much energy it takes to manufacture an organic solar cell, which has a significant impact on both the cost and environmental impact of the technology,” says Brian Landi, assistant professor of chemical engineering at RIT and a faculty advisor on the project

“Organic solar cells are flexible and lightweight, and they have the promise of low-cost solution processing, which can have advantages for manufacturing over previous-generation technologies that primarily use inorganic semiconductor materials,” adds Annick Anctil, lead researcher on the study and a fourth-year doctoral candidate in RIT’s doctoral program in sustainability. “However, previous assessments of the energy and environmental impact of the technology have been incomplete and a broader analysis is needed to better evaluate the overall effect of production and use.”

The study sought to calculate the total energy use and environmental impact of the material collection, fabrication, mass production and use of organic solar cells through a comprehensive life-cycle assessment of the technology.

According to Anctil, previous life-cycle assessments had not included a component-by-component breakdown of the individual materials present in an organic solar cell or a calculation of the total energy payback of the device, which is defined as the energy produced from its use versus the energy needed to manufacture the cell.

The team found that when compared to inorganic cells, the energy payback time for organic solar cells was lower. Ongoing studies to verify the device stability are still warranted, however.

“The data produced will help designers and potential manufacturers better assess how to use and improve the technology and analyze its feasibility versus other solar and alternative-energy technologies,” adds Landi.

The team presented the results at the Institute for Electrical and Electronics Engineers 2010 Photovoltaic Specialists Conference. Anctil, who won a student award at the conference for best research, hopes to further analyze the environmental impacts of solar cell development with additional life-cycle assessments of other types of solar cell technology.

The study was funded through the United States Department of Energy and also included researchers from RIT’s Golisano Institute for Sustainability and NanoPower Research Labs.