Turning up the volume on prostate cancer 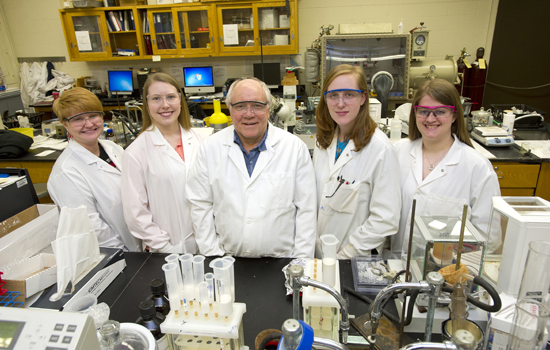 A targeted molecular-imaging method under development at Rochester Institute of Technology could help detect early stages of prostate cancer and improve image-directed biopsies.

RIT professor Hans Schmitthenner is designing molecular imaging compounds that will selectively target prostate cancer cells and light them up with contrast dyes. A $444,367 grant from the National Institutes of Health supports his research with a team of undergraduate student researchers. The project is in the preclinical phase.

Prostate cancer is the second leading cancer death in men in the United States, following skin cancer, according to the American Cancer Society.

“There is no reliable imaging screen for early prostate cancer,” said Schmitthenner, research professor in RIT’s Department of Chemistry and Chester F. Carlson Center for Imaging Science. “Initial diagnosis is dependent on measurement of PSA (prostate-specific antigen) levels followed by confirmation via biopsy. Prostate biopsies can be painful and can have side effects. Ultrasound guidance without a targeting compound is unreliable and often necessitates repeated biopsy for a positive diagnosis.”

Schmitthenner is creating a targeted molecular probe for prostate cancer for use in conjunction with photoacoustic imaging. This emerging diagnostic medical technology combines activation by laser light and emission of ultrasound waves to differentiate between cancerous and healthy tissue.

“Photoacoustic imaging is much more sensitive with targeted probes,” Schmitthenner said. “Cancers even 1 to 2 millimeters in size—pin-head size—can be illuminated on a computer screen.”

Schmitthenner assembles the targeting compound like a molecular puzzle. On one end of the chemical scaffold is a targeting agent that locks onto prostate cancer cells; on the other, a set of contrast dyes that illuminates the malignant tissue on a monitor.

Cancer cells coupled with fluorescent dyes light up like fireflies. Cells capped with these dyes also absorb heat from the laser and expand, producing acoustic waves like a faint buzzing noise.

“I like to say we make the cancer scream,” Schmitthenner said.

The cellular scream detected via ultrasound waves shows up as glowing patch of cancer on a digital screen.

The design of Schmitthenner’s compounds represents a new kind of architecture for targeted molecular imaging agents and is based on his patent-pending design. The patent application lists Schmitthenner and three of his former students, RIT graduates Taylor Barrett, Stefanie Beach and Chelsea Weidman. Their modular approach to building compounds around a chemical scaffold can be modified to target a variety of cancers using different contrast dyes and medical imaging technologies.

“All you need to change is the targeting agent and you can take our scaffold to any tumor,” Schmitthenner said. “Because the scaffold is based on peptides—or strings of amino acids—similar to natural peptides, it will have advantages for translational studies in humans. They are designed to progress into clinical trials without too many hurdles.”

Federal funding for Schmitthenner’s project extends to two of his colleagues in RIT’s College of Science.

Irene Evans, professor in RIT’s Thomas H. Gosnell School of Life Sciences, will evaluate the compound’s ability to bind to and illuminate prostate cancer cells in a confocal fluorescent microscope, a high-resolution instrument that magnifies tissues to the cellular level.