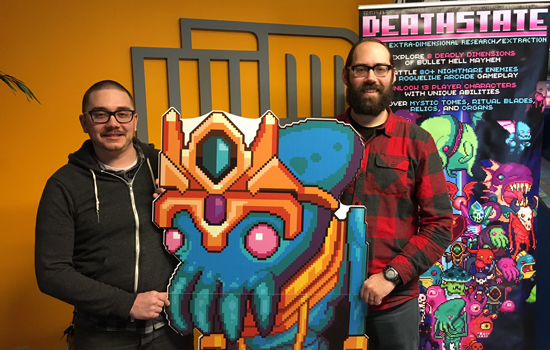 Three video games with ties to Rochester Institute of Technology were featured at the national PAX East Indie Showcase April 22–24, in Boston.

The inclusion of these games in the PAX East Indie MEGABOOTH is significant according to Jennifer Hinton, chief communications officer for RIT’s MAGIC Spell Studios. She cites RIT’s recent designation as one of three Digital Gaming Hubs in New York state by Empire State Development as evidence that RIT and its graduates are making an impact in the industry. The goal is to provide resources and mentoring to encourage students and entrepreneurs to enter the growing gaming industry.

“PAX East provides us with the incredible platform to highlight and share the significant talent of the growing games community in Rochester,” she said. “We’re excited to share these stories with others and show them that there has never been a better or more exciting time to be making games in Rochester. We are thrilled to be at the center of these efforts and be Rochester’s voice and champion for our community.”

Accepted into the Indie MEGABOOTH were:

“The relationship between RIT and gaming companies is invaluable,” said Jason Arena, CEO of Workinman and an RIT graduate. “It’s a perfect storm for creating game developers and great game development companies who are able to compete at the highest level in an incredibly competitive industry.”