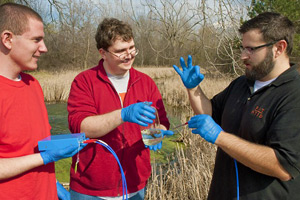 Todd Pagano, an associate professor and director of the Laboratory Science Technology program at Rochester Institute of Technology’s National Technical Institute for the Deaf, has been named 2012 U.S. Professor of the Year by the Council for Advancement and Support of Education and the Carnegie Foundation for the Advancement of Teaching.

His award is to be presented at a ceremony today in Washington, D.C. Pagano was selected from more than 300 nominations; the finalists are featured in a special section of USA Today.

The U.S. Professors of the Year Awards Program, created in 1981, is the only national initiative specifically designed to recognize excellence in undergraduate teaching and mentoring.

John Lippincott, president of CASE, commended this year’s award winners for their “intentional, innovative and inspirational” approach to the classroom experience.

“While our nation enjoys an extraordinary pool of talented professors, those we honor today are truly exceptional,” Lippincott said. “We applaud their belief in a learning process that involves mutual discovery and their dedication to the principle that knowledge liberates, empowers and humanizes us.”

Anthony S. Bryk, president of the Carnegie Foundation for the Advancement of Teaching, said today’s winners have “drawn on the best of what we know from cognitive science, learning theory and evidence-based practices in post-secondary instruction to orchestrate extraordinary opportunities for the students in their classrooms. In honoring these distinguished professors who have exhibited excellence in teaching in their disciplines and extraordinary dedication to their students, we are supporting the centrality of teaching on campus and recognizing its importance to the future of our country.”

Pagano, whose award was in the Master’s University and Colleges category, credits his success to blending two elements: his joy of teaching deaf and hard-of-hearing students, and his passion for chemistry.

“There’s a passion for both chemistry and seeing the students succeed in class, an internship or a permanent job,” he says. “Knowing my students have acquired knowledge that can make a difference in their lives by helping them obtain a job is truly rewarding.”

A campus-wide reception to honor Pagano is planned for Dec. 13 in the Dyer Arts Center in Lyndon Baines Johnson Hall.

“It’s humbling,” Pagano says. “It’s wonderful that we can provide the technical knowledge that students need to use on their jobs. I’m fortunate to work at a truly unique place, where deaf and hard-of-hearing students are taught applied knowledge, the roots of their trade, self-advocacy and lifelong learning skills.” 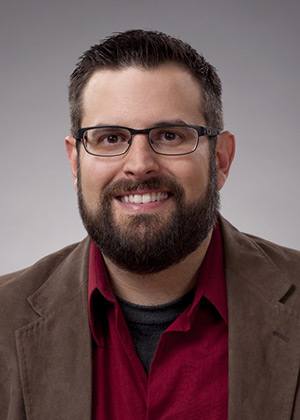 Pagano may have been groomed for teaching by his parents. His mother taught math and his father was a teacher and school administrator.

At his mother’s retirement party, Pagano met his second-grade teacher. She asked if he remembered what he wanted to be when he was in her class. “I guessed a baseball player, but she said, ‘No, you wanted to be a scientist’ and she had a picture I drew with a guy with beakers and a lab coat.”

Pagano, a native of nearby Victor, N.Y., earned a bachelor’s degree in Chemistry from The State University of New York College at Oswego and a Ph.D. in Chemistry from Tufts University. He wanted to return to Rochester after his studies and saw he had the credentials for a job opening at NTID. But that job required him to learn sign language.

“I took that on as a challenge,” he says. “I wanted to teach chemistry on a college level and come home to where my family was in Rochester. Here, I not only got to teach chemistry, but to help build the Laboratory Science Technology program and become its first director.”

To say Pagano engages his students is an understatement. It’s not uncommon for him to jump on a table and dance to illustrate the jitteriness of an electron. In a recent class, he had two students lock arms and walk around the classroom to illustrate a chemical bond, while tossing Koosh balls representing energy absorbed and expended.

“As a teacher, you do everything in your power to convey concepts to help students understand,” he says. “I’m a visual learner. I appreciated any time a teacher would do a visual demonstration, so I try to have at least one visual example in every single class. I’ll mix chemicals together and they do something and it leaves the students guessing for a moment why this is happening. And hopefully at the end of the class, they understand why these chemicals reacted in the way they did. Seeing that look of understanding on their faces because of the way you were able to convey an idea brings a great feeling of satisfaction.”

Students graduating from RIT/NTID’s Laboratory Science Technology program have a nearly 100 percent employment rate in jobs across the country.

NTID President Gerry Buckley, who met Pagano to answer his questions when he was applying for his first job at NTID, said Pagano’s dedication to the educational success of deaf and hard-of-hearing students in the sciences “is without equal. Through his work at RIT/NTID over the past 10 years, he has made it his mission to provide valuable mentorship and opportunities for deaf and hard-of-hearing students to excel in the study of chemistry. Through his efforts, our students have strong foundations in chemistry and have received awards and secured top-notch permanent jobs with companies and organizations across the United States.”

U.S. Professor of the Year was just one of many accolades Pagano has recently received. Earlier this week, he received a Forty Under 40 Award from the Rochester Business Journal. He also received the American Chemical Society Award for Encouraging Disadvantaged Students into Careers in the Chemical Sciences. That award, sponsored by The Camille and Henry Dreyfus Foundation, came with $15,000 for RIT/NTID to help further promote students interested in science. Pagano was also named a Fellow of the American Chemical Society.

Pagano also is working on several research projects. All of his research grants are written to include student involvement. Subjects of his research include access to safe drinking water as a result of a changing climate, tracking carcinogen disposition in the lungs as a function of cigarette smoking and measuring the nutritional value of fruit to see how it impacts the migration patterns of birds.

“I want to keep a healthy balance between teaching and research in my career,” Pagano says. “I think students benefit from both aspects to help them learn and succeed in finding careers.”

“He enjoys teaching and shows a real interest in students, which inspires me,” she says. “He thinks of creative demonstrations to make the students comprehend the concepts he talks about. He doesn’t just teach and move on without ensuring students know what he has just taught. He watches and looks out for any confused or lost expressions on students’ faces and he catches them. Honestly, I wish I could have him as my professor for all of my future science courses!”

Nelsey Carcamo, a current master’s student from Kissimmee, Fla., was the first in her family to go to college when she came to RIT/NTID in 2006. She met Pagano on the first day of orientation and immediately switched her career aspirations from math to science.

“He has a powerful way of turning students on to science,” she says. “I had found my passion and also found a mentor who would go on to open many doors for me.”

Carcamo, who is introducing Pagano during the awards ceremony in Washington, said Pagano’s method of teaching, using both his voice and sign language, was a great benefit to her. He “engages students, challenges students and even entertains students in class – just ask any of his former students for details about his electron dance,” she says.

Pagano is active in the American Chemical Society and has taken about 20 of his students, including Carcamo, to regional or national conferences to present the results of their research.

“Through the research experience, he taught me more than just chemistry,” Carcamo says. “He taught me how to be brave, outgoing, confident and to speak up about my thoughts and ideas. I learned something new every day, new challenges and creative ways toward problem solving. Dr. Pagano has been an essential part of my education every step of the way. I am so grateful to have met him on that day years ago.”

When he’s not busy mixing chemicals, walking in marshes to collect water samples or grading papers, Pagano, of Chili, N.Y., enjoys Fantasy Football: he’s in first place in his league this year after developing algorithms to predict how well players will do.

The U.S. Professors of the Year program salutes the most outstanding undergraduate instructors in the country—those who excel in teaching and positively influence the lives and careers of students. Sponsored by CASE and the Carnegie Foundation for the Advancement of Teaching, it is the only national program to recognize excellence in undergraduate teaching and mentoring.

All undergraduate teachers in the United States, of any academic rank at any type of undergraduate institution, are eligible for the award. Entries are judged by top U.S. educators and other active participants in education.

The Council for Advancement and Support of Education launched the awards program in 1981. That same year, the Carnegie Foundation for the Advancement of Teaching began hosting the final round of judging, and in 1982, became the primary sponsor.