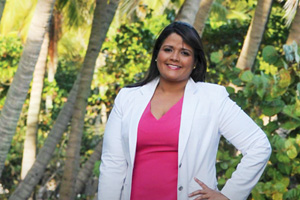 Laura Fermin ’11 studied international business as well as service leadership and innovation at RIT. She now works as a lawyer for the government of the Dominican Republic.

Laura Fermin works as a lawyer for the Ministry of the Presidency in the Dominican Republic.

All came from the Dominican Republic to study at RIT and are part of a network of more than 700 Dominican graduates since the mid-1990s. Some of these graduates stay and work in the United States. Many return to their country with the goal of using their education to improve the island nation where half of the population under the age of 18 lives in poverty.

Students from the Dominican Republic today make up the fourth largest international population on RIT’s Henrietta campus behind India, China and Saudi Arabia. They come on their own, are sponsored by the Dominican government, or are part of a partnership RIT has with PUCMM. 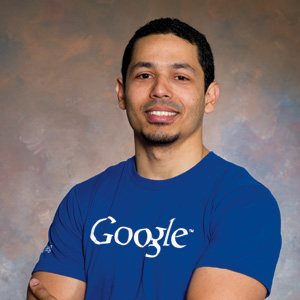 Carlos Leonardo Rosario started working at Google Inc. in January. After 18 months, he will return to the Dominican Republic. “It will be good to take all of that knowledge back home,” he said.

“I think what we see are some of the best students in the country,” said Diane Ellison, assistant vice president for Part-time and Graduate Enrollment Services. “I really do believe these RIT graduates are the future leadership of their country.”

Ellison said Dominican students want to come to RIT because they see the success of others before them, and the programs available at RIT are relevant to the developing country with a growing economy.

RIT is so respected in the country that Ellison and James Miller, senior vice president for Enrollment Management and Career Services, don’t have to laud the benefits of the RIT-Dominican government partnership anymore.

At a meeting last year with the president of the Dominican Republic and senior officials at PUCMM in Santiago, a Dominican official stopped Ellison and Miller during their presentation. She asked those in the room to raise their hand if someone in their family had attended RIT. Three-quarters of the people did, including President Danilo Medina.

“You sit there and think, ‘how does that happen?’ ” Ellison said. “The bottom line is that those who have graduated from RIT have been incredibly successful.”

RIT became interested in creating a relationship in the Dominican Republic in the mid-1990s for a variety of reasons, Miller said. The university’s strategic plan stressed global expansion and officials knew New York was already a gateway state for Dominicans largely due to New York City.

In 1996, RIT signed an agreement with PUCMM and Tompkins Cortland Community College in Dryden, N.Y. Through the program, called Global Connections, Dominican students attend Tompkins during two summers to get acclimated to the United States and earn an associate degree. They return to PUCMM to complete a bachelor’s degree and then come to RIT to get a second bachelor’s degree in a complementary field, such as international business, marketing or innovation management. Credit from the university and community college transfers to RIT.

“It was a great opportunity for those students because in the Dominican Republic, so much of their business and their economy relies on the United States,” Ellison said.

“I think the major reason why I liked that opportunity was because of the timing. I didn’t have to interrupt my studies here,” Fermin said by Skype from Santo Domingo. “Also since it was my first time studying abroad, I could focus on improving my writing and my language skills.”

She liked RIT so much that she stayed for graduate school, studying service leadership and innovation. For her graduate education, Fermin was awarded a scholarship from the Dominican Republic government.

The government scholarship program started after RIT signed an agreement with Dominican leaders in 2008 to expand the relationship into graduate studies. Miller said the Dominican Republic government builds the applicant pool and RIT decides who is admitted. The government then pays for a portion of their education.

After graduation, the students are required to return to their home country and work for two years.

For Fermin, that meant returning after getting a Master of Law degree in France. She now handles consulting for different government institutions in areas such as labor law and business law. And she works on public tendering, the process that happens when the government hires a service or purchases a good.

“I am very interested in the development of my country, and I hope that with my education and the job that I do I can contribute to our development and to the growth of the Dominican Republic,” she said.

Carlos Leonardo Rosario also will return to the Dominican Republic after he finishes his 18-month contract job with Google.

Leonardo Rosario, who will graduate in May but finished the coursework for his master’s degree in computing security and information assurance in December, landed the job after an internship last summer.

“For us, RIT is a life-changing experience,” he said. “It will be good to take all that knowledge back home. That’s the loop we have to complete.” 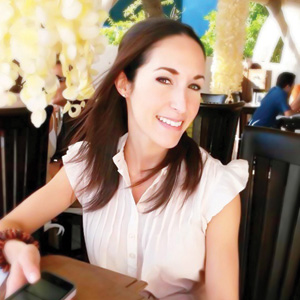 Staying in the U.S.

Attending school in Rochester helped Sarah Miura ’02, ’04 (international business, MBA) get an interview for her position with World Fuel Services in Miami.

“The senior vice president of operations at the time went to University of Rochester, and only because he saw that I had graduated from RIT he told the chief information officer he should meet me. It gave me a ticket in.”

But Miura’s experience and education sealed the deal. Miura had worked her way up the ladder from business strategy manager to regional product portfolio manager at Hewlett-Packard Inc. between 2005 and 2010. She now integrates new companies into World Fuel Services after they are purchased as a strategic and solutions management professional.

She said she uses everything she learned at RIT regarding management in her position. Does she want to go back to the Dominican Republic?

“I will most likely have my vacation home and family there forever,” she said. “For now I am comfortable building my career and life here in the U.S.”

RIT in the DR

Pedro Taveras Núñez has been transferring his RIT knowledge at PUCMM for a decade. He started teaching a class called telematics engineering and was promoted to director of the Information and Computer Science department in 2004. He became dean of Engineering Sciences in 2009. 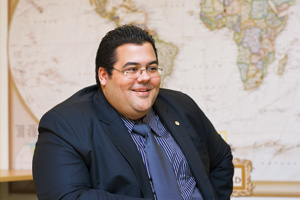 Núñez came to graduate school at RIT before the government scholarships were created. After he finished his undergraduate degree in systems and computer engineering at PUCMM, his parents wanted him to study in the States. A vice president at PUCMM suggested RIT.

He researched the university online and liked what he read about the information technology program. He applied, was accepted and started in fall 1999.

He remembers his first class on transmission systems. “I’m surrounded by people from Xerox and Kodak and experts in engineering transmission systems and everybody was introducing themselves and what they do. It got to my turn and I said, ‘I’m Pedro. I know computing and I want to learn about communications.’”

But Núñez quickly made friends—some from other countries—and he learned the value of having classmates from different backgrounds.

Now as an administrator at PUCMM, he is a promoter of RIT with engineering students interested in studying abroad and of a new networking and systems master’s degree program being offered at PUCMM in conjunction with RIT.

That is one of two dual master’s degree programs designed for working professionals in the Dominican Republic. The other is in service leadership and innovation.

Faculty from both RIT and PUCMM teach the courses. More than 200 people have been enrolled in the programs since this initiative began in 2002.

Núñez, Leonardo Rosario and Fermin paved the way for current students such as José Carlos Batista, who didn’t know much about Rochester until he arrived at RIT in 2012. But he knew studying in the United States would be an adjustment.

There’s the cold weather to contend with. “I had been in the U.S. a lot but never in winter,” he said about visiting relatives in New Jersey. “My first winter I had no idea.”

He misses Dominican food, although he said RIT food service does a pretty good job with Dominican dishes as part of its international food options. And he hasn’t found many opportunities to dance in Rochester except for Salsa night.

But the 19-year-old has no regrets deciding to study industrial engineering at RIT and has already made an impact. He has been a peer advisory leader during international orientation week and works as a math tutor through TRiO Student Support Services, a program for low-income and first-generation students. He also works at Salsarita’s Fresh Cantina on campus.

It is too early to know what awaits him after he graduates. “I always wish to go back. I absolutely love my country and my family is there,” he said.

What is for certain is that while at RIT he is part of the international student population that is enriching the learning for all students in the classroom. And when he leaves, Batista will become part of a successful network of graduates.

More than an education

Mariano came to RIT as part of the PUCMM partnership. After graduation, she began work at Solectron Inc. and moved to Celestica Inc. as a quality engineer in 2007. Today she is quality assurance manager.

“Originally I came with the intention to complete my master’s and grow my opportunities in the job market and then return,” she said. “But I met my husband and had some motivation to stay.”

Mariano said she still appreciates the support system she found at RIT, which made it easier being so far away from home.

“My education at RIT has opened the door to great career opportunities that have shaped me into becoming a better professional,” she said.

Mariano and Polanco, who grew up in New York City, have two boys, Christopher, 3½, and Marcos, 1½. Polanco is a lead test engineer at Freescale Semiconductor Inc.

Said Mariano: “I came all the way to the States to meet my Dominican husband.”