The official Gene Polisseni Center Dedication Ceremony will take place in the new arena 5:30-7 p.m. Thursday, Sept. 18. The event is open to the public, with doors opening at 5 p.m. Fans will be able to join members of the men's and women's hockey teams for an open skate, tour the brand new arena, and win some Tiger Swag.

In recent years, popularity of both the men’s and women’s hockey teams has skyrocketed resulting from the men’s team’s historic run to the 2010 Frozen Four and the women’s team winning the 2012 NCAA Division III Championship. As fandom rose, RIT quickly outgrew Ritter Arena. A lack of amenities at Ritter Arena, paired with limited seating (two restrooms and one main concession stand) made hockey night a test of patience and endurance. Spectators would cram into the building often standing three-deep behind the railing, and due to the lack of reserved seating would often arrive two hours before game time to claim seats.

The new Gene Polisseni Center boasts 4,000 seats, and with standing room, has a total capacity of 4,300 complete with a student/pep band/Corner Crew section. Other seating options include reserved chair-back seating and a special club section with buffet meals and cash bar. Six corporate suites are available—four on the club level, one on the media level, and a unique bunker suite at ice level.

“The goal is to make the arena and game-night atmosphere as family friendly as possible with all of the amenities and interactive features,” said Jordan Steffan, assistant director of sales and marketing for University Arenas. “We want RIT students, staff, faculty and alumni to have a unique experience while also making it a premier destination for families in Rochester.” 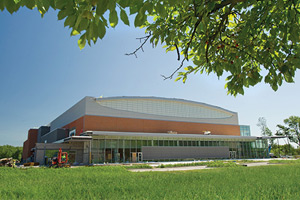 An exterior shot of the arena, located on the south side of the Student Alumni Union.

James Watters, RIT’s senior vice president of finance and administration, began his extensive research into the vision for the Polisseni Center in 2011, including working with others to settle on a central location close to the Gordon Field House and Activities Center, Ritter Arena and dining services, making outdoor tailgating and related events possible. Soon after initial donations to the arena were made, including a $1 million gift from alumni Stephen and Vicki Schultz and a $4.5 million donation from the Polisseni Foundation (with backing from RIT trustee B. Thomas Golisano), several other rinks were visited as potential models gauging the best fit for the RIT campus.

“The Gene Polisseni Center will be one of the most attractive venues in all of college hockey,” said RIT women’s hockey head coach Scott McDonald. “Our combination of a tremendous facility, great atmosphere and great fan support should help us bring in stronger recruiting classes. Down the line, we are hopeful the new building will allow us to attract and host a NCAA Division I Women’s Hockey Championship.”

“This arena puts us on par with the big programs in the country,” said RIT men’s hockey head coach Wayne Wilson. “It will help us draw more big name opponents and expose Division I hockey to all of Western New York, allowing our fans the opportunity to watch great hockey in a top-notch facility with incredible amenities.”

The Gene Polisseni Center will be among the few new arenas without a center-ice scoreboard. Instead, two 23 foot by 13 foot high-definition video boards—a gift from RIT alumnus J.M. Allain ‘03— will be located on each end of the ice, complete with full captioning.

“With the pitch of the arena the way it is, having the video boards on opposite sides of the rink gives every seat in the building an unobstructed view,” said Watters. “In addition, it gives us great flexibility to host external events, such as concerts or graduations.

“I have no doubt that the Gene Polisseni Center will be a tremendous success,” said Watters. “This will be a building that not only the RIT community, but greater Rochester community will embrace. We want to bring the intimacy of Ritter Arena and add the high-end aspect of the club level and corporate suites, while making it a family-friendly experience.”

According to representatives from RIT’s Parking and Transportation office, the flow of traffic once the center opens will not be affected. When U Lot opens in September, it will have about 250 spaces, with other parking spaces in locations that are less than a quarter-mile away. For after-hours events, visitors will be encouraged to park in D, S and R lots, which can accommodate roughly 1,300 vehicles.