Off-road racing is back at RIT this summer as the university hosts 100 collegiate race car teams from around the world at the 2016 SAE Baja World Challenge June 9-12. This is the sixth time RIT has hosted one of the Society of Automotive Engineers’ student design and racing competitions that takes place at the university and at Hogback Hill Motocross Track in Palmyra, N.Y.

More than 1,200 student-engineers, who designed and built off-road vehicles, are expected for the event that will consist of hill and rock climbs, acceleration and maneuverability challenges and a four-hour endurance race.

“The Rochester race is known to be one of the premier college design series events. It happens every three years here, and it’s a blast,” said Martin Gordon, event organizer. Gordon is also the faculty adviser for RIT Baja and a professor of mechanical and manufacturing engineering technology in RIT’s College of Applied Science and Technology.

When SAE announced the 2015-2016 schedule of U.S. events, the Rochester competition was filled in 17 minutes, and more than 40 teams were on a wait list to attend. Teams registered include Purdue, Ohio State, Clemson, Cornell, Johns Hopkins, the University of Rochester, Clarkson University and a large contingent from Canada, Venezuela, India, Brazil, South Korea and Mexico. 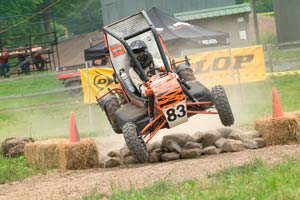 A history of champions

RIT Racing has competed in Baja SAE competitions for more than 25 years, winning both national and international events.

Last year, the RIT Baja Racing team didn’t let the unexpected news of their car being impounded by Brazilian Customs officials at the port of Itapoá stop them from competing at SAE Baja Brazil. What began as a jest to build a new car, took more serious form as team members pieced together a plan, and eventually a makeshift vehicle. With parts, gears and equipment from at least five Brazilian teams, the RIT car, dubbed the B15 Tubarao Branco (the white shark), took the field. After passing the important inspection portion of the competition, ‘the shark’ lined up for the four-hour endurance race clocking one of the fastest lap times. It wasn’t enough to win the race, but crossing the finish line was equally important.

That is Baja at its finest. Teams that prevail over the season are the ones that compete for one of the top prizes—the Mike Schmidt Iron Team Trophy— given to the season’s best team based on cumulative points in each of the three national events. It also holds significance for RIT’s Baja team as the trophy was established in 2001 to commemorate the late Mike Schmidt, a member of one of the early teams, and to highlight perseverance, engineering excellence and competitive success.

In its first event of the 2016 season, RIT Baja topped the field, placing first overall in Tennessee in April, competing against 100 international collegiate racing teams. With placements in the top five in several key events, including second place in acceleration and first in suspension, the team closed the competition with second place in the endurance race, and with top points overall to win. The team traveled to California in May. Its chances are as good as any to top the field in Rochester in June.