3D-printed circuit board patterns processed in milliseconds and using a fraction of the electricity.

Flexible solar cells that can be integrated into wearable technologies.

This is some of the innovative work underway at the New York State Center for Advanced Technology in Additive Manufacturing and Multifunctional Printing, or AMPrint Center, which officially opens in RIT’s Institute Hall in October. 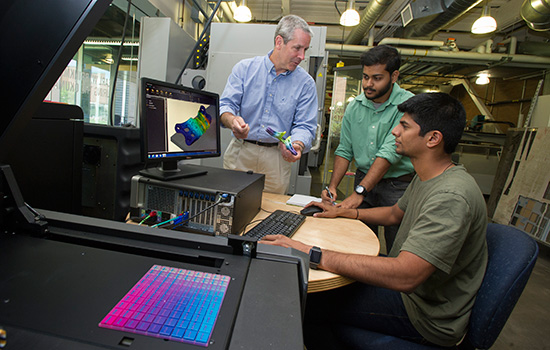 Denis Cormier, left, explains to doctoral students Pritam Poddar and Chaitanya Mahajan how different items were printed. On the computer screen is a mock-up of an engine part, color coded to show areas of material weakness that could be stressed, allowing engineers to design reinforcements before manufacturing.

The center brings together university and corporate researcher-scientists to advance two industries that the region is noted for—printing and imaging— in a way that will significantly impact manufacturing in New York state and the nation.

“The vision for this center is to be at the forefront of creating the next generation of 3D-printing technologies, materials and applications,” said Denis Cormier, the Brinkman Professor in RIT’s Kate Gleason College of Engineering and director of the new center. “That can take the form of new technologies invented here or through partnerships with really innovative companies.”

For RIT, the center offers the opportunity to conduct groundbreaking research, while also training students as the next generation workforce. Corporate partners will have access to important research and development to drive their businesses.

Multifunctional printing is an industry with unlimited potential. According to Wohler’s State of the Industry Report, 2014, the worldwide 3D printing industry is expected to grow from $3.07 billion in revenue in 2013 to $12.8 billion by 2018, and to exceed $21 billion by 2020.

Defined as the process of developing single products using a variety of materials with different conductive properties, multifunctional 3D printing opens the door for a wide range of products to be made faster, stronger and less expensively.

“If I print a copper circuit, that’s an electrical function,” Cormier said. “If I print a heater, like the heaters on the back of your windshield, that’s a thermal function. You can print clear materials in a lens, or with magnetic properties. Or you can use biological materials for imprinting living cells for tissue engineering.” 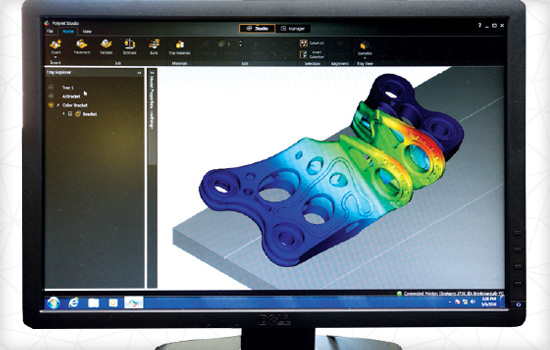 3D-printed projects begin as computer-aided designs, with software used to create precision drawings or technical illustrations. This is a mock-up of an engine part which will be printed to demonstrate structural integrity, allowing an engineer to view weak spots that need reinforcement.

A consortium of universities and corporations led by RIT was awarded the designation as a Center of Advanced Technology by NYSTAR, a division of NYS Empire State Development in September 2015. The designation is for a 10-year period, renewable, based on performance, and includes funding of $921,000 to support the center’s research and industry outreach efforts. The center was also awarded $500,000 from the state’s Higher Education Capital Matching Grant Program, which was used toward building the lab. Xerox Corp. also joined as a founding partner of the center.

For the center, RIT has acquired several manufacturing systems in the past few years, including a NovaCentrix photonic curing system. Usually found in industry, it is rare in a university setting and will be a resource for both faculty-researchers and regional companies creating new devices using metals and ceramics.

Two companies, local start-up Sensor Films Inc. (SFI) and Xerox Corp., are producing large-scale material ink jetting systems to print circuit board patterns. With support of a $100,000 grant from the NYS Regional Economic Development Council, the center will acquire SFI’s Starlight, an ink jet film deposition system, and begin to integrate its processes with the NovaCentrix.

Thermal processing of conductive materials on circuit boards, in industry, takes place in large, radiant heating ovens that use a lot of electricity. By integrating the NovaCentrix, the process can be done with a flash of light in milliseconds, and use less than five percent of the electricity based on energy consumption tests done by the center team, Cormier explained.

In another project with Xerox, a print-head jetting system for one of the 3D printers was fabricated as part of an engineering multidisciplinary senior design project. Xerox donated equipment for the prototype. Further refinements continue this fall. 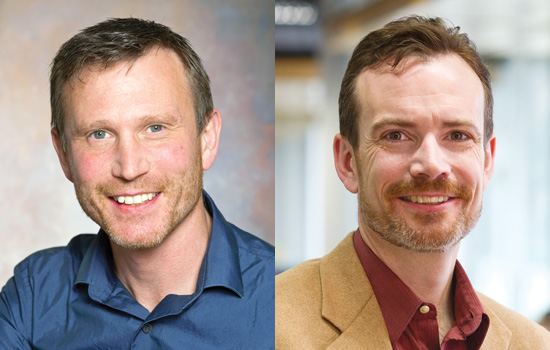 Microsystems engineering professor David Borkholder ’92 (microelectronic engineering) uses the lab capabilities to build nano-structures for a micro-pump implanted system designed to deliver bio-therapies to address noise-induced hearing loss and other hearing disorders. Vader Systems, a Buffalo start-up, was developing an ink-jet printing system using metal wire. After meeting Cormier at a symposium last year, the company sought his advice on how to further develop its liquid metal 3D-printing process, just one example of the promising connections Cormier and AMPrint Center are building.

“That’s a really exciting partnership in the making,” said Cormier. “It’s still in the early phase, but I’m willing to invest center resources to help them get to where they want to be. If we are able to help them grow, then we are doing our job.”