Since designing its first racecar in 1992, RIT Racing has been one of the most successful collegiate teams in the country competing in national and international design challenge events sponsored by the Society of Automotive Engineers. The team is celebrating its 25th anniversary of racing, and to highlight the occasion, the team is fielding two cars for the first time: a traditional combustion engine (gasoline) racecar and its first all-electric Formula car. Both sleek, aerodynamic and very fast racecars were built on campus in the machine shop in RIT’s Kate Gleason College of Engineering. 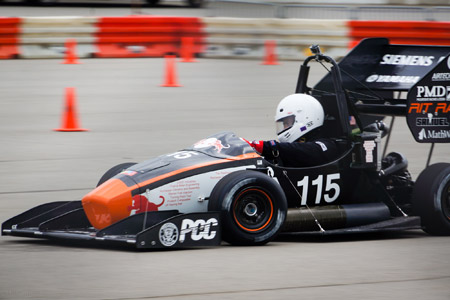 Being part of the Formula team is as much about building competitive racecars as it is about applying engineering and automotive technology that students learn in the classroom. Over time, RIT Racing achieved a reputation as a top performer with impressive car designs. The university remains one of the few collegiate teams that builds custom-equipment for the drivetrain, suspension, brakes and control systems rather than purchase off-the-shelf products.

Competitions take place at some of the top professional tracks across the country, and teams must demonstrate safety and fuel economy before competing in acceleration, handling and maneuverability challenges. Events close with an endurance race that separates the best-in-class from the also rans.

Race events also provide companies the opportunity to see top engineering talent. Success on RIT’s Formula team helped launch careers for alumni who are as passionate about racing as they are about engineering. Alumni contribute skills and experiences for a wide range of companies, including the competitive field of motorsports. 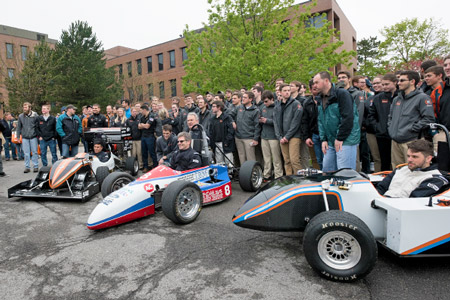 Current and former team members gather for the unveiling of three cars at Imagine RIT 2017. Left to right, F25 (this year’s racecar), F1 (the refurbished, first Formula car, driven by Lynn Bishop), and the first E1, the team’s all-electric vehicle.

When Bishop proposed building RIT’s first Formula racecar in 1992, he had practical goals—design an uncomplicated car that could compete against the top collegiate race teams in the country. RIT Formula Racing would exceed expectations and be in the top 10 in each of its first five seasons—a feat only a handful of established teams would match. Twenty-five years later, RIT Racing remains one of the top teams among 450 international collegiate teams from around the world. Read more about RIT Formula Racing in the recent University Magazine coverage.

RIT Racing set some of the fastest track event times during the Formula Student East competition this summer. As the only U.S. entrant in the competition in Budapest, Hungary, the team raced against some of the top student Formula teams in the world. Despite a fuel pressure sensor failure during the final event, the team was proud to be on the global stage. “They say in racing, it’s always easier to make a racecar more reliable, than to make it faster. We demonstrated that we have plenty of speed, finishing fifth in autocross at the event—an achievement we are all incredibly proud of considering the high-caliber of the competition at FS East,” said Phill Kelner, project manager of the 2017 RIT race team.

Group shot of Budapest teams. The RIT car is the fifth car from the left in the third row back.