Historic class has strongest academic credentials and is most diverse

The 2,800 first-year students about to enter RIT are a talented group and the most diverse class in the university’s 188-year history.

The entering class was selected from a record more than 20,500 applications.

The class boasts strong academic credentials: a mean high school grade point average of 92, a mean SAT score of 1283 and a mean ACT score of 29.

And while enrollment figures will not be confirmed until mid-September, early counts indicate that 29 percent of the first-year class self-identifies as people of color, up from 26.9 percent the previous year, with 17.5 percent from traditionally underrepresented minority populations, up from 15 percent a year ago. Deaf and hard-of-students are 8.5 percent of the class. 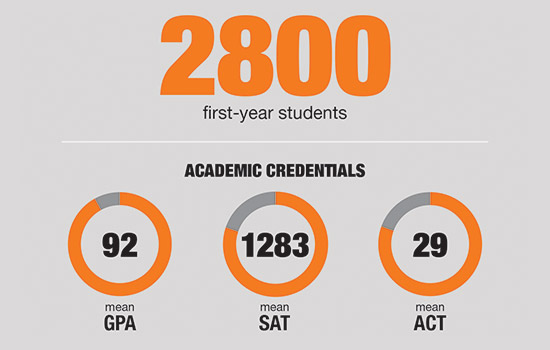 “We are thrilled to have such a diverse and focused group of students join RIT this fall,” said James Miller, senior vice president of Enrollment Management and Career Services. “This is exactly the type of community we are trying to create as outlined in RIT’s strategic plan.”

One of the dimensions of the plan focuses on leveraging difference, and many of the objectives focus on achieving a greater balance of women, minority men, and deaf or hard-of-hearing students in STEM majors. This year, 69 percent of underrepresented minority students and 56 percent of female students will enter STEM programs.

This year, 53 percent of the freshman class will come from outside New York state and 7 percent from outside the United States, with the largest international groups from China, India, Canada, South Korea and Nigeria.

“This is an interesting class because they are diverse in so many ways—in race, gender, income level,” said Keith Jenkins, interim vice president and associate provost for Diversity and Inclusion. “The richness they bring to class discussions is simply refreshing.” 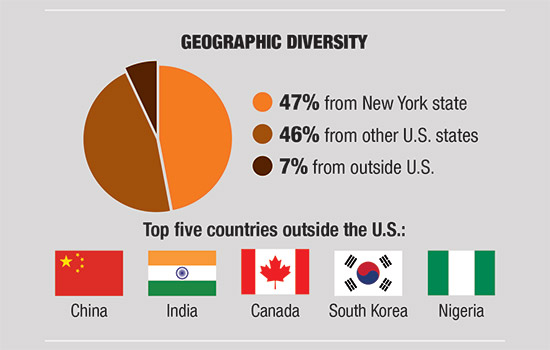 Jenkins got to meet some of the new students this summer when he taught an intercultural communication class for the Summer Bridge Program, a four-week summer program for incoming students through the Higher Education Opportunity Program (HEOP). The 50 students entering this semester is the largest group participating in RIT’s Summer Bridge program ever, 10 more than last year.

Jenkins said increased diversity is good for the students and for RIT, and helps better reflect the world community. “ The growth in the diversity of students adds to the richness of our students’ education overall,” he said. “I think Enrollment Management and Career Services can be applauded for not resting on their laurels, but continuing to push as society becomes more diverse.”

Among the group are 32 Destler/Johnson Rochester City Scholars, a record number for that program, which was established in 2010 by former President Bill Destler and his spouse, Rebecca Johnson. That program provides free tuition and academic and social support for qualified graduates of the Rochester City School District and city charter schools, those who have the academic credentials for admission and demonstrate financial need. 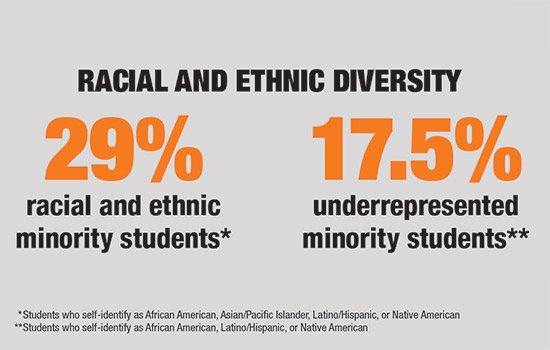 Miller noted that RIT’s rising demand and growth in diversity come despite a difficult climate for higher education. “There is increasing competition, increasing price sensitivity in the marketplace. Programs such as New York's Excelsior Scholarship, which provides free tuition to qualifying students, may also change the dynamics,” he said. Despite these challenges, Miller said that RIT is making strides recruiting diverse and talented students because it “offers an incredible value proposition,” citing placement on lists such as The Princeton Review’s Colleges That Create Futures: 50 Schools That Launch Careers by Going Beyond the Classroom.

While RIT continues to make strides in attracting a more diverse student body, Jenkins said “the challenge remains to close the graduation gap,” ensuring that students complete their degrees on time. “We have a number of initiatives underway today to provide greater opportunities for underrepresented students to be successful in achieving their goals.” He cited leadership programs such as MOCHA and WOCHA; scholarship programs such as The Louis Stokes Alliance for Minority Participation (LSAMP), McNair Scholars, HEOP and Rochester City Scholars; and academic support including Multicultural Center for Academic Success, the Native American Future Stewards program and Women in Science.

Overall, Jenkins is encouraged by what this year’s cohort of new students will bring to the university. “This class offers hope for young people who will be enthusiastically engaged in making a difference at RIT, in the Rochester community, in the U.S. and globally. They are very much globally-minded citizens.”