We welcome all students, faculty, staff, alumni, parents, trustees, and friends of the university to a very special ceremony, and accompanying events, celebrating the inauguration of Dr. David C. Munson Jr., the 10th President of the Rochester Institute of Technology.

A full slate of inauguration events kickoff Wednesday, Sept. 27 with a student picnic and alumni symposium followed by additional events over the next day. The inaugural ceremony will take place at 3 p.m., Thursday, Sept. 28 in the Gordon Field House and Activities Center. The ceremony, which will also be live streamed, will feature keynote speaker President Philip Hanlon, Dartmouth College. View the full schedule of events. 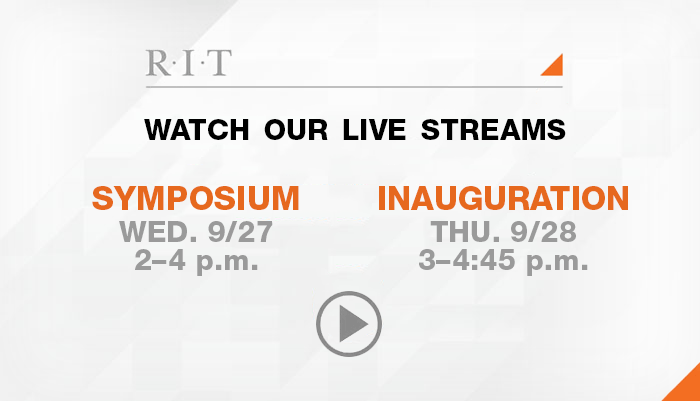 Videos will be streamed live from the Inauguration website at the times listed above.

Munson became president of RIT on July 1. He is the the former dean of the University of Michigan College of Engineering.

As RIT’s president, Munson is responsible for one of the nation’s leading research and career-oriented universities featuring nearly 19,000 students from all 50 states and more than 100 foreign countries, 124,000 alumni, $73 million in sponsored research and an endowment of more than $750 million. RIT’s full-time undergraduate enrollment ranks RIT among the top 10 largest private universities in the United States. RIT is the third largest producer of undergraduate degrees in science, technology, engineering and math among all private universities in the U.S. RIT also has one of the oldest and largest cooperative education programs in the country.