Doubling down on Creativity and Innovation

The inauguration of President Munson

Today’s Rochester Institute of Technology is clearly different from the school created in the 19th century and RIT must continue to evolve to help solve the challenges facing society now and in the future, David Munson told hundreds gathered Sept. 28 to witness his inauguration as the university’s 10th president.

“Let’s double down on making our campus a thriving ecosystem to stimulate creativity, and innovation which is the translation of an idea into a product, service or process that has economic or social value,” said Munson. “We must continue to rethink our educational systems, so that we are building a broad, multidisciplinary skill set where creativity is exercised at every turn.”

Munson asked the crowd what kind of education students should receive in order to contribute as a guiding light in the future of society. Citing a 2016 World Economic Forum report, he answered that no matter which discipline a student is passionate about, they “should learn about and gain experience in critical thinking, problem solving, creativity, innovation, collaboration, communication and other high-level skills.” 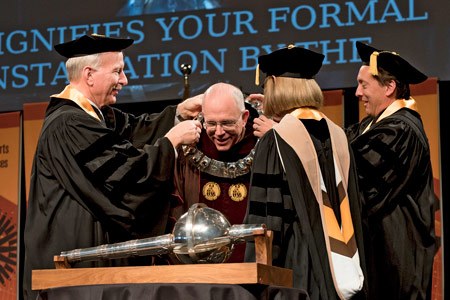 Munson was installed as the 10th RIT president by members of the Board of Trustees.

Thousands from the RIT community, including more than 40 college and university leaders from throughout the nation, attended the ceremony in the Gordon Field House and Activities Center. Thousands more viewed the event online.

In line with Munson’s renowned appreciation for the performing arts, the ceremony featured interludes of traditional Japanese drumming from Wadaiko Rochester Taiko and a poem from Sam Finston, a first-year game design and development major and member of RIT’s Mental Graffiti group.

Dartmouth College President Philip Hanlon served as keynote speaker for the inauguration. Hanlon, who worked closely with Munson at the University of Michigan, looked towards Munson’s past to make predictions about the future for RIT.

“Dave will challenge RIT to elevate its capacity to tackle the great issues of our time — through the research and creative work that occurs on your campus and by honing a student experience that equips your graduates for impact in the years to come,” said Hanlon. “He will help you realize your loftiest ambitions and overcome those sometimes artificial boundaries erected within academia that limit our ability to address such complex and wide-ranging questions.”

Hanlon and Munson also quipped about RIT’s School for American Crafts, which found its permanent home at RIT in 1950—after originally being founded at Dartmouth College in the 1940s.

“I have no idea how we let that happen, but clearly, RIT is all the richer for it,” said Hanlon.

“Phil, I do have to ask—have you got anything else for us?” replied Munson.

In a short video, colleagues and students from the University of Michigan shared reflections on their experiences with Munson. One former student ended the segment exclaiming “I don’t think RIT knows what it’s in for!” 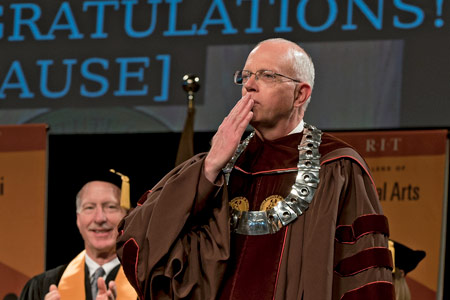 Munson signs 'thank you' after being installed as president.

In his inaugural address, Munson drew on RIT’s past to help create a vision for its future. Harking back on RIT’s birth from the marriage of a 19th century learned society, known as the Rochester Athenaeum, and a technical training school, called the Mechanics Institute, Munson said that education at today’s RIT “must go beyond the purely practical.” He stated that, “clearly, we need strength in science and technology, but we must be more than a modern-day Mechanics Institute.”

“In my opinion, the world needs us to be more like the Athenaeum,” said Munson. “Along with preparation for a career, our students will develop a broad skill set, an understanding of the larger world and a passion for making a difference.”

Munson also praised RIT’s excellence in technology, art and design, while encouraging the community to work across disciplines to help solve the most pressing issues of our time.

“Our university is truly unique in higher education, with its core in technology, the arts, and design, and other important disciplines radiating out from that core,” said Munson. “Every student can be involved in creating things that never before existed, and then putting those concepts into motion, in an effort to improve the world.”