He got hooked on the patients’ stories and the science and became a certified emergency medical technician. Buckley took on leadership roles and realized that medicine was more than a hobby. 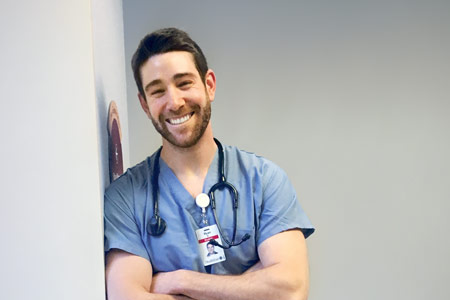 Dr. Ryan Buckley ’13 (biomedical sciences, international studies) is part of the first wave of alumni from the College of Health Sciences and Technology to become a physician. Here, he is pictured at the University of Minnesota Medical Center, where he trained while in medical school.

Initially he came to RIT to major in international and global studies in the College of Liberal Arts. But toward the end of his sophomore year, he enrolled in the biomedical sciences major in the College of Health Sciences and Technology to prepare for medical school.

Now, Buckley ’13 (biomedical sciences, international studies) is in his first year of the Yale Emergency Medicine Residency Program at Yale-New Haven Hospital. He started the four-year program this fall after graduating in May from the University of Minnesota with his Doctor of Medicine and Master of Public Health degrees.

Buckley is in the first wave of alumni from RIT’s College of Health Sciences and Technology to become physicians.

This fall, a record 40 to 45 seniors from across RIT’s nine colleges will apply to medical and other health professional programs, with the majority from the biomedical sciences major, said Douglas Merrill, professor of biomedical sciences.

The number of medical school applicants is up from an average of 10 to 12 students in the early 2000s. Interest in pre-med increased when RIT solidified its health brand in 2008 with the RIT & Rochester Regional Health Alliance and with the opening of the College of Health Sciences and Technology in 2011. 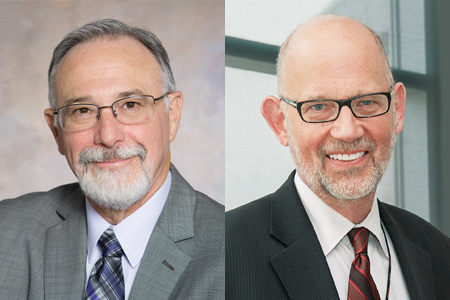 Douglas Merrill, professor of biomedical sciences and Dr. Daniel Ornt, vice president and dean of the Institute/College of Health Sciences and Technology

Ornt joined RIT in late 2011 with 30 years in academic medicine at University of Rochester Medical Center and at Case Western Reserve University School of Medicine in Cleveland. He knows the pressure students are under and why they need to be prepared.

“Having experience as a faculty member in leading medical schools, I understand the importance of having applicants with good grades and research experience,” Ornt said. “The competition is stiff. We’re talking 53,029 applicants for medical school and roughly 21,025 openings. We have to make sure our students have outstanding records and breadth of experience in order to be competitive.”

Students from different majors across campus wind up at the door of the Pre-Medical and Health Professions Advisory Program seeking direction.

The advisory program, currently housed in the College of Health Sciences and Technology, guides students through the complicated application process for medical school, nursing school, physician assistant and other graduate programs in the human medical sciences.

“It is not uncommon for students who want to become medical doctors to ask how they can major in pre-med at RIT,” said Merrill, who is also the director of the Pre-medical and Health Professions Advisory Program. “There is no such thing as a pre-med major. Although the biomedical sciences program comes the closest, I try to make it clear to these students that medical schools accept applications from any student who is enrolled in, or has completed, any accredited undergraduate program as long as they have the specific science prerequisites required of all applicants.”

Merrill and his team work in partnership with nearly 200 students and their academic advisers to ensure the applicants satisfy their degree requirements and prerequisites for their graduate or professional programs.

Merrill built a seven-member committee, new last year, to provide students one-on-one assistance while preparing their application. Students often begin in their freshman year to build a package of health-related experiences and academic accomplishments to draw upon. 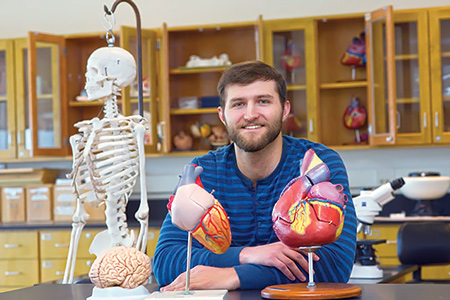 William Marmor ’17 (biomedical sciences) worked with Douglas Merrill, who is director of the Pre-Medical and Health Professions Advisory Program, to put together a competitive application for medical school. Marmor was accepted at Stony Brook University School of Medicine.

Pre-med advisers guide their students through this lengthy and detailed process, critique their personal statements and groom them for admissions interviews.

Merrill has watched the demand for pre-medical advising grow from the four students he helped apply to medical school in 1985. When he became head of biology in the College of Science in 1998, he passed the advisory role to Kay Turner and then to Kristen Waterstram-Rich. Coming full circle in 2016, Merrill resumed directorship of the advising program and realized it had grown too big for one person to handle.

“In the early years, the pre-med advising was me with part-time staff support,” Merrill said. “When I took over again after an almost 20-year gap, I realized I couldn’t afford to let anyone fall through the cracks because I had too many students I was working with, so I created this committee.”

William Marmor ’17 (biomedical sciences) worked directly with Merrill during the year before the advisory team expanded. Their hard work to produce a competitive application paid off, and Marmor was accepted at Stony Brook University School of Medicine.

“Dr. Merrill pushed me to work really hard to do well on my MCAT (Medical College Admission Test), to keep my grade point average up and to continue to be involved in meaningful service work,” he said.

Marmor served for two years as president of the Health Sciences and Technology Student Association and was a member of the Pre-Health Student Association. He also volunteered as a chapter leader for Global Brigades, a humanitarian organization not affiliated with RIT.

He organized two service trips to Honduras to help treat community members at medical clinics and to prevent illness through the construction of bathrooms, concrete floors and eco-stoves.

Marmor was inspired as a teen by a before-and-after surgery video of a girl born with a cleft lip.

The transformation struck him, and Marmor chose RIT as a stepping stone to medical school.

“The courses I took affirmed that I want to be a doctor,” Marmor said. “I loved taking anatomy and physiology. Classes like medical pathophysiology, endocrinology, psychology—everything was interesting and made me excited about the medical field.”

Like Marmor, Victoria MacPherson ’14 (biomedical sciences) is a former president of the Health Sciences and Technology Student Association and member of the Pre-Health Student Association. She is in her second year at the Philadelphia College of Osteopathic Medicine and expects to graduate in 2020.

MacPherson is the second deaf student to attend the Philadelphia College of Osteopathic Medicine. She was preceded by RIT/NTID alumnus Dr. Benjamin Lessig ’92 (chemistry), who earned his D.O. degree in 1996.

“I strongly believe in treating the person as a whole and that lifestyle factors can dramatically affect a person’s health,” she said. 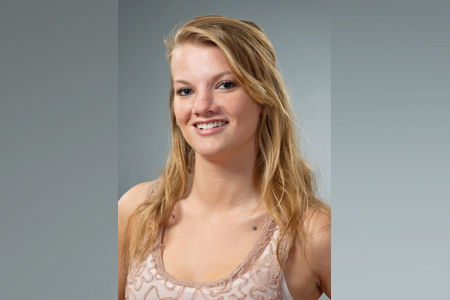 Victoria MacPherson ’14 (biomedical sciences) is in her second year at the Philadelphia College of Osteopathic Medicine.

MacPherson looks forward to building a strong deaf-patient base and to breaking down barriers to health education.

“The health literacy among deaf people is extremely low on average,” she said. “Having someone that a deaf person can communicate with in their own languages will help them understand their health needs better.”

Similar to Buckley, MacPherson’s volunteer experience with an emergency medical service drove her to enter medicine.

Coming to RIT gave her the education and guidance to pick the best classes to take, extracurricular activities to pursue, and how to find the right study abroad and research experiences.

“I was presented with so many opportunities at RIT that really helped prepare me for medical school and the real world,” MacPherson said. “Not to mention, the access services for deaf students at RIT is one of the best in the country.”

Buckley, who graduated the year before MacPherson, said his success reflects the guidance and mentorship he received from RIT faculty and pre-med adviser Waterstram-Rich.

Buckley’s volunteer service as deputy chief and chief of the RIT Ambulance for three years gave him leadership experience and lifelong friends.

“In my graduating year, three of us from the RIT Ambulance entered medical school, and since then there’s been several former members accepted to both medical school and physician assistant school,” Buckley said. “It served as an excellent opportunity to learn patient evaluation and treatment skills and provided networking opportunities within the medical field.”

Buckley paired his medical degree with a Master of Public Health to treat individual patients and population groups. His long-term career goal is to focus on the needs of Native American and rural communities.

“I want to foster relationships between rural hospitals and academic centers to increase patient access to health care and increase medical student/resident exposure to rural medicine during their education.”