RIT celebrates the class of 2018

As new technology evolves, the challenge for graduating students is to figure out how it can benefit humanity.

That was the message Thomas Wheeler, former director of the Federal Communications Commission, shared with graduates at Rochester Institute of Technology’s 133rd annual commencement in the Gordon Field House today. He was one of several people who spoke, including the president of Student Government and RIT President David Munson, who was attending his first graduation ceremony at RIT as president.

“We have now evolved from the industrial era created by the railroad and telegraph into the information era, and we need a new set of rules,” Wheeler said. “That is the challenge you inherit today.”

Wheeler said RIT graduates are better poised to accept the challenge of finding new uses for technology than other students because of RIT’s focus on blending technology and courses relating to the humanities. All RIT baccalaureate students take courses in liberal arts as part of their majors.

“The education you received at this institution—whether in technology, business or the liberal arts—gives you a leg-up on most of your fellow citizens who struggle to understand the effects of new technology and the new economy,” Wheeler said. “It positions you to use your inherent goodness and your sense of fair play to attack the new challenges that work against such qualities. You graduate into a world that needs what you have learned about humanity as much as what you’ve learned about technology. You will have ample opportunity to put your hard-won insights and skills to work. I hope you will harness them, not just for the sake of technology per se, but also for the purpose of helping our society deal with the effects of that technology.”

Wheeler said the world “needs people with an instinct to question, an interrogation that is anchored in an understanding of the human dynamic and stimulated by unbound imagination. We need citizens who want to deal with behavior, not just write code or a new business plan. Society calls out for innovators who see technology not in terms of controlling markets, but of expanding human potential. In that regard, I have always been impressed by what RIT has done to put the intersection of technology and humanity into practice.”

He told the students it is time for them to look beyond using technology to create without consideration of the consequences.

“It is time to rebuild a society and economy torn asunder by technology,” he said. “It is time to once again re-establish the interrelationship between technology and human values. You have been well-prepared to take on these challenges. What a privilege to be the ones tasked with dealing with these complex, technology-based, but very human problems. Grasp that challenge. Make it your own.” 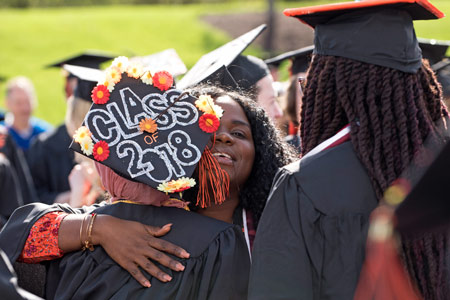 RIT conferred 4,747 degrees this academic year at all its campuses—including in Croatia, Dubai, Kosovo and China—and nearly 2,400 who received degrees at ceremonies today and Saturday in Henrietta. There were 23 students who earned Ph.D.s.

Wheeler received an honorary doctoral degree from RIT Provost and Senior Vice President for Academic Affairs Jeremy Haefner and Christine Whitman, chair of RIT’s Board of Trustees, for his exemplary public service, impressive entrepreneurial work and for championing the spirit of innovation and creativity that has impacted and inspired millions.

RIT President David Munson congratulated the students and said it was a special day for him as well, as he’s completing his first academic year at RIT.

“The RIT family and Rochester community have welcomed Nancy and me with open arms as we have acclimated to our new surroundings,” Munson said. “We are amazed and impressed by the talent and devotion that surrounds us. This includes students, faculty, staff, alumni and our many university partners. Our transition has been wonderful and we thank you all for your support and kindness.”

Munson said it was fun to watch the graduates during his first year leading RIT.

“RIT has creative students who are so full of ideas,” he said. “And you have passion to implement those ideas. We are proud of all that you have accomplished in the years leading up to today.”

Munson noted that the commencement was a new beginning, as graduates enter the workforce, graduate school or the military.

“At RIT, we are confident you have received tremendous preparation from your education both inside and outside the classroom,” he said. “Many of you have engaged in, for example, wonderful co-op experiences or other forms of experiential learning. You are well prepared to undertake the rigors of the real world and get off to a fast start in your respective fields.”

Munson also reminded them to become good citizens of the world.

“It is my hope, graduates of the Class of 2018, that you wake up tomorrow not solely focused on how to earn a living, rather, that you go out and do your best to enrich the world,” he said.

“During your time at RIT, you spent time forging relationships, working together in labs, collaborating on senior projects, traveling overseas, participating in student clubs, and offering service in center-city Rochester,” Munson said. “You didn’t do these things alone. That is why I know that you are prepared to contribute to conversations that will build our future, whether these conversations are more formal and organized, or at a coffee shop with a group of friends. Now is the time for neighbors and citizens to come together.”

He recalled some memories from his years at RIT—seeing the Gene Polisseni Center open, experiencing the first snowstorm in years that cancelled classes, and RIT becoming a top 100 national university.

“The experiences that we have shared at RIT have shaped who we are today, and despite our different journeys, we all leave RIT today as equals, as the graduating Class of 2018,” he said.