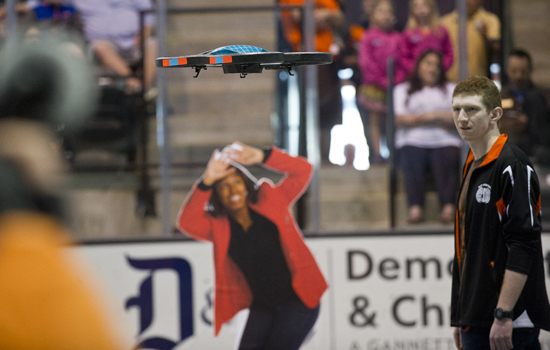 Imagine RIT kicked off with an 8:30 a.m. pre-event, Dr. Destler’s Challenge, in the Gene Polisseni Center. Dubbed “RIT Meets the Jetsons: Flying Cars,” the event involved 14 teams piloting quadcopters around the Polisseni Center to take photos of cardboard cutouts of ”RIT celebrities” and to complete a variety of autonomous tasks.

Spectators cheered as the quadcopter drones competed in a series of aerial challenges at the Gene Polisseni Center on Saturday morning, providing the opening act to the 2015 Imagine RIT: Innovation and Creativity Festival.

The RIT Meets the Jetsons: Flying Cars challenge—which involved 14 teams of students—was a new event at the eighth annual Imagine RIT: Innovation and Creativity Festival, a day designed to showcase the talents and creativity of Rochester Institute of Technology’s students, staff and faculty.

Team Cosmo became an early crowd favorite when their quadcopter flipped, hovered and danced into the final round of the competition. But what put it over the top, and probably won the team first place, was its coordinated and very funky dance to “The Eye of the Tiger.”

Challenge winners were able to select from a $1,000 prize or one of President Bill Destler’s antique banjos. Team Cosmo opted for the funds, while second place team Nimbus the Great took home a beautiful antique banjo from 1890.

The early morning challenge launched a perfect spring day, which saw approximately 35,000 people on campus to “Experience the Future” through Imagine RIT’s more than 400 interactive exhibits in science, technology, engineering, the arts and mathematics.

Guests at Imagine RIT got a preview of the XYZ Camera Rig, which will be moving to its new home at the Metropolitan Museum in New York City later this month.

“We took over where last year’s design team left off with the first model of the rig,” said Fabrice Bazile, a fifth-year electrical engineering student in RIT’s Kate Gleason College of Engineering. “This one has a few more safety features and the ability to use the camera remotely, things that will really benefit the museum staff and their work.”

Bazile is one of six students on the project team that re-designed a mobile camera rig system for the museum to image larger works of art that cannot be easily moved. The rig can move horizontally across the floor, and its central system can be raised vertically to nearly 18 feet.

This year’s design team made improvements to the vertical lift to provide more stability for the mobile camera rig and system the museum staff will use to image rooms of artwork such as tapestries and other pieces from its permanent collection.

After the festival, the team will finalize the design and last minute adjustments, make its class presentation, and then head to New York City to present the rig to museum officials.

Outside Liberal Arts Hall, students from the School of Communication were manning the “Wordistry” booth, asking visitors to propose a unique word and its meaning. Dozens of entries were collected in addition to entries from area high school students prior to the festival.

“It's been amazing, especially seeing everything through the eyes of the different ages of the children,” she said.

Abbott entered the word “simplexity,” meaning an action that is simple resulting in a complex action. She was inspired to come up with that word after watching students at another exhibit activate microchips with the push of a button.

The winners of the contest received iPads.

In the festival’s Computer Zone, an interdisciplinary team of students and faculty demonstrated a new way to experience music. At the “Pulse” exhibit, audiences listened to a short concert of classical and pop music while their heartbeats were visualized on a large projector screen.

After downloading an Android or iOS app, created by computer science students, the users slipped on a specially designed pulse sensor, created by industrial design students. The sensor communicates with your mobile device and is able to show your heart rate, in addition to the synchronized visuals created by new media design students. As the music changed from classical to Kelly Clarkson’s “Heartbeat Song,” the bouncing parallelograms and lines twirled and sped up along with people’s heart rates.

“This is a great way to get people more involved with a performance, because you can actually see how your heart is interacting with the music, ” said Ashita Khetan, a computer science graduate student from India. “I really like how an interdisciplinary project pushes people to learn more about each others specialties and create a more complete product.”

The science of superheroes

The “Science of Superheroes” exhibit dissected super talents and caught the attention of superhero fans like Matt Greenlaw and his son, Reese, 7, from Rochester, N.Y., who stopped by to learn more about his Marvel Comic favorite, Thor.

The jellyfish is another animal with superhero skills, said exhibitor Colin Snyder, fourth-year biotech major. Jellyfish are “immortal”— in a sense.

Experiencing the unseen through infrared photography

Infrared photography lets photographers explore the world of the “unseen.” The human eye can’t see infrared light since it lies outside of the visible spectrum. To make infrared pictures, photographers filter out the visible light and only allow the infrared spectrum through to the camera sensor.

Students, faculty and staff at the School of Photographic Arts and Sciences (SPAS) turn this technical process into fun, creating a unique camera system that let exhibit visitors walk away with hauntingly beautiful prints to show off to their friends and family.

The camera sensor was converted to be sensitive to infrared, allowing RIT photographers to take pictures without a filter to make the images. The resulting image reflected infrared light in ways that made dark glasses clear and other colors look rather surreal.

For Carrie and Dennis Glitch of Henrietta, the SPAS exhibit provided a unique family portrait with their 6-year-old daughters, Evelyn and Olivia. “The girls really enjoyed it,” said Carrie, who earned a master’s degree in multidisciplinary studies from RIT in 2005. “It’s a fun way to get a distinctive portrait we wouldn’t be able to get anywhere else.”

Mike Dear, director of operations for the College of Imaging Arts and Sciences, said the idea for the exhibit has been on the radar for a while. “We thought about doing this for years,” Dear said. “I have a passion for photography and portraiture—infrared portraiture, in particular, which is very beautiful to me. It makes people’s skin smoother and softer and it’s educational for visitors to see how the IR spectrum affects an image.”

Based on the large line that was forming inside Gordon Field House before Imagine RIT even started, he’s not the only one.

Thrill on a smaller scale

It took 50,000 K’nex pieces to build the Theme Park Engineering exhibit, and seven large tables to display it at the Gordon Field House.

“We wanted to do a show-stopping exhibit to get our information out about our club and our interest in careers in theme parks,” said David Swerzenski, a third-year mechanical engineering major from Oakridge, N.J. and a club co-founder.

In addition to the lighted amusement rides—powered by motors, pulleys and a touch of gravity—the exhibit had posted information explaining G-forces, listing possible careers in the theme park industry and RIT-offered majors that could lead to such jobs.

The 10-person club assembled the structures over the last three weeks, with teams working in six hour shifts, said club co-founder Danny Miller, a fifth-year mechanical engineering student from Schnecksville, Pa., who is seeking a career in theme park engineering.

The K’nex pieces came from various kits owned by team members, which they repurposed to create the original structures.

“He’s easy to buy for at Christmas,” said mom Becky Miller, who was attending the festival for the first time.

Danny Miller said the toughest part was moving the assembled rides to the Field House for Imagine RIT.

And what will become of this theme park after the festival?

Graduates streamed into the Alumni Oasis in the Gene Polisseni Center to get their photos taken with RIT mascot Ritchie the Tiger, check out the RIT Archives and get a cold drink.

This was the first time Scott Miga ’04 (information technology) had been able to attend Imagine RIT, although the Rochester resident gets to campus for other events. He stopped by the Alumni Oasis to get a free selfie stick, a treat from the Alumni Association.

More than 500 alumni pre-registered for the selfie stick, while thousands had their photos taken with Ritchie, courtesy of Ken Huth ’88.

Including reporting by University News staff. 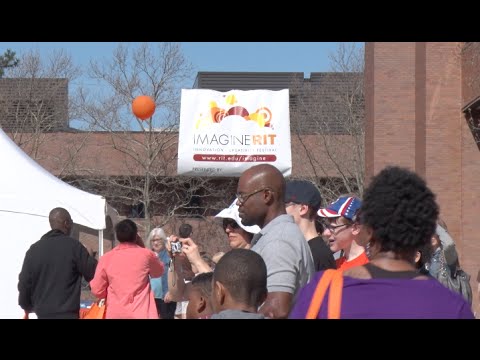